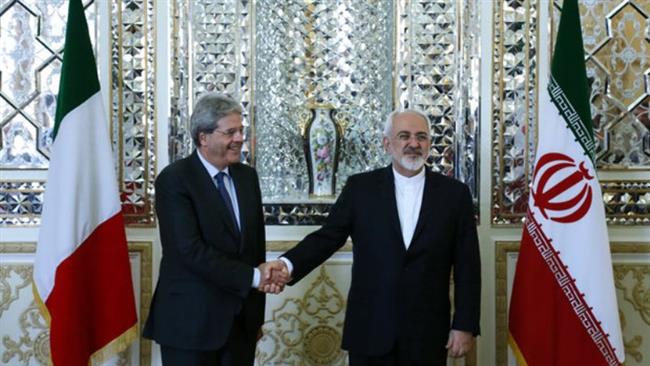 Parliamentary and judicial exchanges, cooperation in education, and combating narcotics trafficking and organized crime were among issues raised at a meeting between the two top diplomats.

Iran’s Foreign Minister Mohammad Javad Zarif says the level of Iran’s trade with Italy is “above normal” and the two countries are planning balanced and long-term bilateral economic relations.

Zarif made the remarks in a meeting Tuesday with his Italian counterpart Paolo Gentiloni, adding that Iran’s foreign policy is geared toward strengthening ties with neighboring and regional countries and joining efforts to settle crises and establish security and stability.

“Instability, insecurity, terrorism and extremism are against the interests of all regional countries,” Zarif further said.

Gentiloni, who arrived in Tehran along with the Italian minister of economic development and a group of high-ranking directors of Italian state-run and private companies, expressed Italy’s resolve to elevate the level of contacts between the two countries.

He also expressed hope that Iran’s recent nuclear agreement with P5+1, dubbed the Joint Comprehensive Plan of Action (JCPOA), would be a successful model in the settlement of disputed issues.

The two ministers also discussed issues such as parliamentary and judicial exchanges, cooperation in the fields of education, and combating narcotics trafficking and organized crime.

In another development, Minister of Economic Affairs and Finance Ali Tayyebnia met with Federica Guidi, the Italian minister for economic development, and stressed the necessity for doubling the current $1.5 billion volume of trade exchange between the two countries in the near future.

Guidi, for her part, expressed her country’s interest in developing trade and economic relations with Iran.

At the end of the meeting, a memorandum of cooperation was signed by the Italian Export Credit Agency (SACE), and the Organization for Investment, Economic and Technical Assistance of Iran (OIETAI) and Iran’s Central Bank. 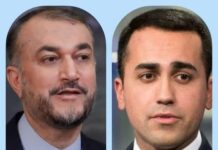