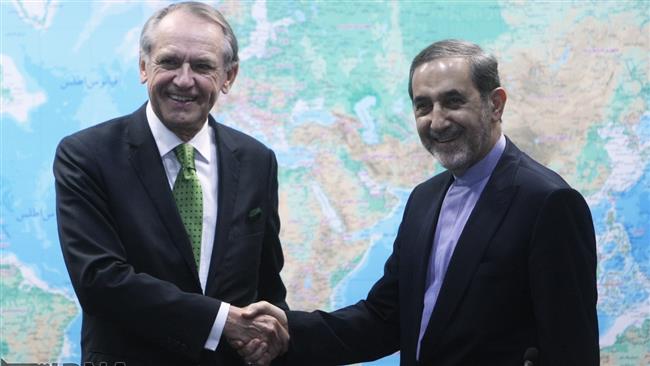 Terrorists from more than 80 countries are engaged in a war against the legitimate governments of the Middle East, Velayati said.

A senior Iranian official has called for an immediate end to ongoing conflicts in Yemen and Syria, saying these countries are bogged down in critical conditions.

“War in Yemen and Syria must end quickly and we must exhaust [our potential] in favor of establishing peace,” Ali Akbar Velayati, a foreign affairs advisor to Leader of the Islamic Revolution Ayatollah Seyyed Ali Khamenei, said in a meeting with United Nations Deputy Secretary General Jan Eliasson in Tehran Tuesday.

“Terrorists from more than 80 world countries are present in the [Middle East] region and have engaged in a war against legitimate governments in the region through forming extremist groups,” he added.

Velayati also said that Saudi Arabia is conducting airstrikes on residential areas across Yemen and damaging the country’s infrastructure.

The UN envoy, for his part, pointed to the critical situation in the Middle East and urged more efforts to establish peace and security in the region.

Eliasson said the UN would spare no efforts to improve peace and security in the region.

At a meeting with Eliasson Tuesday, Shamkhani said that the United Nations refrained from taking decisive action to end military aggression, arms supply and financial aid to terrorists as well as suppression of Muslims in the occupied Palestinian territories. Such failures raise serious questions about the UN performance.

The SNSC secretary added that Iran has staved off the spread of terrorism and genocide in Syria and Iraq by supporting the legal and popular governments of Syria and Iraq.

“Western countries must change their approach toward the establishment of lasting security in the region through a genuine fight against terrorism,” Shamkhani said.

The UN deputy chief, for his part, hailed Iran’s efforts in settling refugees over the past decades and said Iran’s experience is needed for dealing with refugee crises in other countries.

Iran’s Foreign Minister Mohammad Javad Zarif also met with the UN official, stressing the importance of solving the ongoing crises in the region through political approaches.

He said that the intensity of the regional crises is directly linked to the conduct of political leaders in the region.

“The realities of the region must be discussed in a realistic way,” Zarif said.

He added that all world countries must prioritize countering threats posed to regional countries.