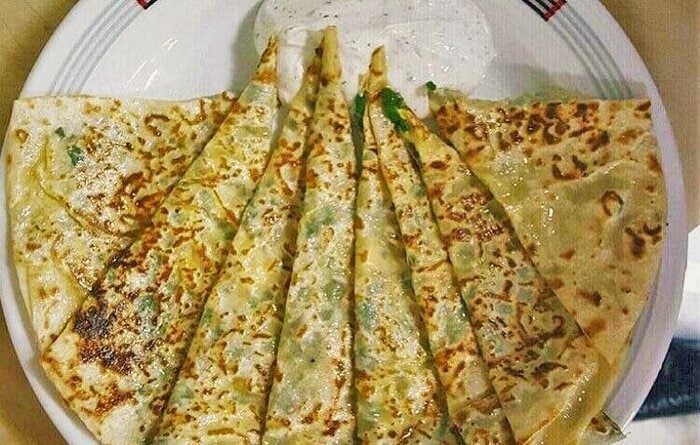 One of the good customs in the Iranian city of Sardasht, which has its roots in popular beliefs there, is getting together for different reasons. And making traditional food is one of the main reasons for people to assemble socially. One of these traditional dishes is "Kalaneh".

This traditional food is made by women, especially the older ones in villages, and when it is ready, the rest of the people of the village show up and eat it together.

Traditional tools can be used for spreading the dough and baking it. You will also need some local green onions, flour, dough and a clean place for the tools and the ingredients needed to prepare the traditional dish.

One of the women mixes the flour and water to prepare the dough.

Ingredients: Two cups of flour, 100 grams of spring onion, 1/2 cup of butter oil, one cup of milk, salt and sugar.

Sift the flour 2-3 times and pour it into a relatively large bowl and dig a hole in its center.

Then add some milk to it and if you want, you can add some sugar at this point.

Add some salt to the flour mixture and stir until more milk needs to be added. Add the milk to the dough and stir until you finally get soft dough. Knead the dough thoroughly with your hands until it is ready.

Then leave the prepared dough for 25 to 30 minutes to rest and rise.

When the dough puffs up and doubles in volume, divide it into several equal portions.

Place the rounded parts of dough (approximately 100 grams each) one after the other on a clean mat to which some flour has already been added.

Another one of the women spreads the dough pieces so that it is neither thick nor so thin that it burns, and delivers them to another woman who pours the finely chopped onions over the flattened dough.

In the final stage, the dough and the chopped onions are put on a heated traditional tool called “Saaj” to bake.

The lady in charge of cooking the Kalanehs turns them on the Saaj at regular times to bake them on both sides, and finally puts the cooked and prepared Kalanehs on a table to cool.