JCPOA Violators Should Be Held Responsible for Consequences: Iran DM

Iran's Defence Minister Brigadier General Amir Hatami says the Islamic Republic of Iran remains committed to its nuclear deal with six big powers, but the violators of the deal should be held accountable for possible disastrous consequences for international security. 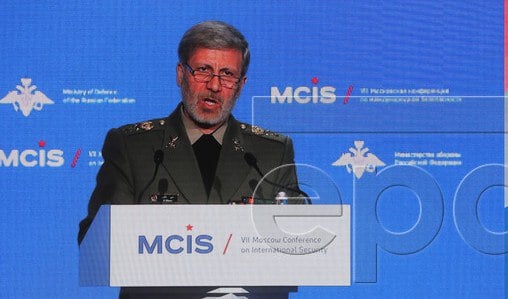 “In the eyes of Iran, the US violations of its commitments under the deal as well as its western allies’ support for the violations and their excuses to hamper the implementation of the nuclear deal amount to a heavy blow to the ongoing trustful relations at international levels,” he was quoted as saying in a Farsi report by IRNA.

The Iranian general went on to say Iran views strengthening of its defence capability and deterrent particularly in missile technology as its natural right to establish a legitimate regional defence mechanism.

“We will resolutely follow up our defence development because it is a must in coping with various and emerging threats in the region,” he noted.

Part of World-System’s Power Transferring to East
Elsewhere in his address, the defence minister said with a comprehensive understanding of the ongoing sensitive international situation, Moscow Security Conference has rightly put its focus on the most critical security crisis of the region.
“That’s why the conference is expected to have positive results and achievements for the international security.”

According to General Hatami, the current trend of globalization reveals that the economic-security and political structure of the international system is undergoing new changes.

He said the changes are brought about by the communication era as well as the emergence of the new geopolitical values which have created new conditions and paved the way for the emergence of new global players.

“This means that for the first time over the past four centuries, the international developments are not necessarily initiated by the West. Meanwhile the leadership of the new developments is not exercised by one side, like what we witnessed during the Cold War. Today, a new group of global players are going to undertake the initiatives at regional and international levels and play their leading role,” he said.

US Not Interested in Asian System Development, Security
He said the western Asia region is mistakenly called the “Middle East” by the west based on its hegemony over the world and added the new changes have worried some global players like the US.

“They have come to this conclusion that a unified and comprehensive Islamic World will create a secure and strong system in terms of geopolitics within the current world system. That’s why they are seeking to hamper the realization of the new system and prevent from the establishment of an Asian-system,” he said.

General Hatami underlined that the dominant global players are afraid of any unified, secure and strong system in the region because it would stand in stark violation of their interests and threaten their power by establishing new law and norms.

“To preserve their interests, they are seeking to make divisions among the regional states.”

Self-Interest-Seeking Paves Way for Terrorism
The Iranian official also referred to the regional policies of big powers and said monopolization, hegemony and self-interest-seeking prepare the ground for emergence and growth and terrorism.
“Today, we are witnessing that the worst inhumane campaigns developed in Washington are leading to the massacre of innocent people. Based on the experiences gained over the past 20 years, the campaigns are predicted to unfold a long series of crises for human beings over the next twenty years,” he noted.

The Iranian defence minister underlined that the leading role played by the extreme groups like ISIS and Al-Qaeda over the last two decades and their strategies to create complicated civil wars across the world especially in Iraq and Syria reveal how dangerous and destructive the US-developed campaigns are.

He said the US is fuelling the regional tensions by using ISIS as proxy group, offering relentless support for the occupation of the Palestinian lands, recognizing Jerusalem Al-Quds as the capital of Israel and adopting racist policies toward regional young Muslim groups.

ISIS Ideology Still Alive
Elsewhere in his address to Moscow Security Conference, General Hatami said though ISIS has suffered heavy blows in Western Asia, the ideology of the terrorist group is still alive.

He went on to say that the complete defeat of ISIS requires full understanding of its ideology and rejecting it in all forms.

“The threats of terrorism will not be eliminated as long as the main sponsors of ISIS in the region and abroad provide the terrorist group with expensive complicated weapons and the US evades its regional responsibilities and refuses to abandon its self-seeking policies in the region,” he added.

Region Far From Stability
The Iranian defence minister said since the radical administration of Donald Trump took office in the US in 2017, there has been no bright prospect of stability in the region.

He said not only Iraq and Syria but the whole region is predicted to face a complicated and harsh condition in the coming years.

“Amid the current situation, our region seems to be far from stability because ISIS has not yet been defeated completely and the regional and international tensions are getting deeper,” General Hatami said.

Iran Calls for Partnership Instead of Balance-Making
The defence minister of the Islamic Republic of Iran also praised the constructive role of Russia in the region and said interfering in regional states’ internal affairs and making divisions stand in stark contrast with the will and interests of the nations and governments of the region.

He called for developing new strategies to ensure regional security and said such strategies contribute to the national sovereignty and territorial integrity of all regional states.

General Hatami said the Islamic Republic of Iran offers partnership instead of balance-making to achieve the mentioned goal.

The seventh Moscow International Security Conference was kicked off on April 4. Attended by 700 delegations from 95 countries including the Islamic Republic of Iran, the conference is to last till April 5.