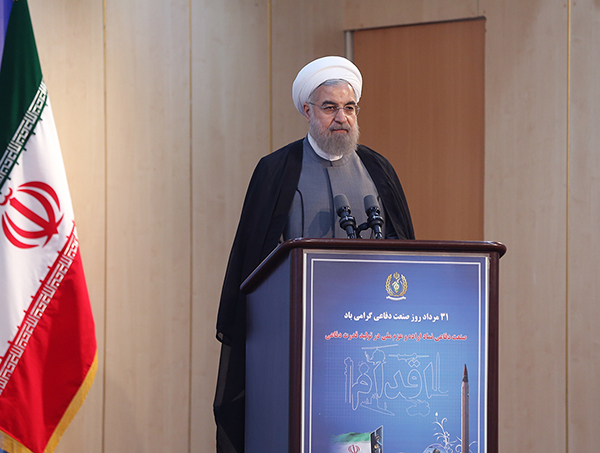 Iranian President Hassan Rouhani hailed the ‘ethical’ success achieved by the Iranian nation through the nuclear deal with world powers (JCPOA), saying that the country managed to prove it is telling the truth and the enemies are lying about Tehran’s nuclear program.

Addressing a ceremony to mark the National Day of Defence Industry, Rouhani said the country achieved many accomplishments and victories in JCPOA, one of which was the nation’s ‘ethical victory’.

“For 12 or 13 years, or even more, they accused us of secretly pursuing the development of Weapons of Mass Destruction (WMDs); however, Iran’s accession to the chemical convention and the inspections carried out at Iran at that time proved that our enemies had been raising false and groundless charges against us,” Rouhani said, as reported by IRNA and translated by IFP.

“We were not looking for chemical weapons and stockpiling them, and this was made clear to the world.”

“The next issue used by them as a pretext to raise anti-Iran propaganda and put the country under pressure by passing Resolutions was that Tehran was secretly seeking to develop nuclear weapon,” Rouhani noted, referring to the anti-Iran claims commonly known as PMD (Possible Military Dimension) case.

He went on to say that the country responded to tens of questions by the International Atomic Energy Agency (IAEA) and managed to close the PMD case.

“The settlement of PMD case was an ethical victory for Iran. We proved to the world that we were honest and our enemies are liars,” he said.

He described the IAEA’s move to close the PMD case as a legal, technical, and ethical success for Iran and a great job that no one can deny.

“We proved to the international community that if the Leader of the Islamic Revolution issues a fatwa against the development, stockpiling, and use of nuclear weapons, we adhere to the order.”