It’s Time for Europe to Play Its Role in Saving JCPOA: Iran 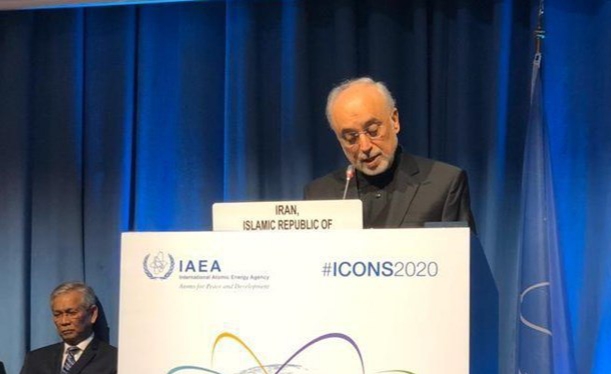 Iran's nuclear chief says it is about time for Europe to play its role as a main JCPOA stakeholder in saving the 2015 nuclear deal through fulfilling their commitments irrespective of the US administration’s unjust pressures.

Ali Akbar Salehi, the head of the Atomic Energy Organization of Iran (AEOI), made the remarks in a Monday address to the International Conference on Nuclear Security: Sustaining and Strengthening Efforts, which is underway in Vienna, the capital of Austria.

It is a distinct honor for me to attend the third International Conference on Nuclear Security; an issue of great importance for my country.

Over the past few years, the Islamic Republic of Iran has gone through a very difficult ordeal, which we believe could be seen as a yardstick for measuring the extent of practical adherence of the States to their multilateral and international obligations. It was in December 2015 when the overwhelming majority of the international community felt that, amidst prevailing chaos throughout the world, diplomacy is proven to be still the most viable option for tackling the toughest issues in international relations. It was a dominant belief that the JCPOA could set a model in this regard. It could also serve as a good template for cooperation amongst the Agency and the participating Member States for enhancing security issues. But, unfortunately, this euphoria didn’t last long. With the embedded irrationality in the US administration’s mindset, such optimism is fading away so quickly.

It is about time for Europe to play its role as a main JCPOA stakeholder in saving the deal through fulfilling their commitments irrespective of the US administration’s unjust pressures.

Tomorrow, we will be celebrating our 41st anniversary of the Islamic Revolution; a revolution that brought independence and freedom and saved us from all sorts of dependency on the United States. Unfortunately, the US administration has not yet come to its senses in recognizing the reality on grounds and keeps on inflicting harm on our people as well as the people of the entire region while creating and supporting terrorist groups such as ISIS; the climax of which is reflected in the cowardice terror of our beloved major general Soleimani who was the most instrumental element in combatting ISIS. Be it known as my country strongly retaliated once, it will never hesitate to strike back when necessary.
The Islamic Republic of Iran, as a member to the NPT, maintains that, as it is envisioned in Article IV of the NPT, nothing [I quote] “shall be interpreted as affecting the inalienable right of all the Parties to the Treaty to develop research, production and use of nuclear energy for peaceful purposes without discrimination …” [end of quote].

Furthermore, the Articles II and III of the Statute of the IAEA define the basic objectives and functions of the Agency, as it [I quote] “shall seek to accelerate and enlarge the contribution of atomic energy to peace, health and prosperity throughout the world” [end of quote].

In this context, nuclear security and safety measures must be utilized to support such objectives and functions. While acknowledging the distinctions between the two areas, these measures are seen to have common aim of protecting human health, society and the environment, and should be dealt with, appropriately, at the national level, by the relevant competent authorities.

Despite opportunities, expansion of new nuclear technologies and related applications has induced susceptibility on the issue of nuclear security.

These new emerging sensitivities raise the level of current concerns on issues such as the lack of transparency on more than 80% of existing Highly Enriched Uranium and Plutonium stocks. Moreover, the new nuclear security threats including EMPs, UAVs, Cyber-attacks and other non-conventional means of sabotage, especially when there are no agreed international rules and regulations governing such activities, make the situations even more complicated.

Growing threats of terrorism using nuclear materials and radioactive sources are also another crucial elements in addressing the radioactive and nuclear security issues; thus requiring the strengthening of national capacities in prevention, detection, and response to unauthorized removal and illicit trafficking of nuclear materials.

Terroristic threats against my country are augmented by menace of attacks and industrial sabotage against our nuclear installations by the US and Zionist regimes as evidenced in the past by the cyber Stuxnet, and this necessitates international condemnation as well as prevention.

Needless to say that, measures to strengthen nuclear security should be in coherence with achieving sustainable development goals in peaceful nuclear technologies and applications at the national, regional and global levels, and therefore not to commit any action that would hamper them. Likewise, any measure aimed at undermining or negatively affecting the State’s national nuclear security regime runs counter to the promotional objectives and functions of the Agency.

Moreover, we believe that nuclear security activities of the Agency should be funded with no string attached by the donors, and while acknowledging that the primary source of funding for such activities should be through the NSF, new innovative forms of sustainable extra-budgetary funding could also be explored in order to guarantee sufficient, assured and predictable resources for the implementation of the Agency’s projects in meeting the needs and priorities of Member States.

It must be asserted once again that the responsibility for nuclear security within a State rests entirely with that State. The Agency, however, is expected to assist Member States, upon their request and on a non-discriminatory basis, in their efforts to enhance a sustainable nuclear security regime based on their national needs and priorities. The Agency should also be seen as a platform for sharing knowledge and the exchange of lessons learned, built upon the experiences and good practices shared by different countries. Such deliberations should be carried out in a constructive and purely technical basis to avoid politicization of the issues and exerting undue pressure on any specific State.

At the national level, the Islamic Republic of Iran has a very unique situation. Building upon its past experience in facing multiple threats including state terrorism reflected in the martyrdom of our nuclear scientists, Iran has taken upon itself to enhance further the mechanisms of its nuclear security throughout the country, through its own resources and also by utilizing the Agency and other Member States’ potentials.

To take advantage of the Agency’s assistance, several national workshops and one regional workshop have been held during the past few years in Iran, notably, Interregional Workshop on Introduction to Nuclear Security Detection Architecture, held in Tehran last July. Likewise, I should mention the fruitful visit of DDG for Safety and Security of the Agency to Iran.

Furthermore, Iran is updating the regulations regarding the security of radioactive sources and the relevant guidance on control and combating illicit trafficking of radioactive and nuclear materials. In addition, the relevant recommendations reflected in INFICIR/225/Rev.5 have also been envisaged in Iran’s contract with the Russian Federation for the two new nuclear power plants under construction.

To conclude, we hope that this conference by taking stock of the achievements gained thus far in addressing the current and emerging issues and challenges will serve as an important input 7 for the preparation of the Agency’s next Nuclear Security Plan for the period of 2022-2025.

Let me also wish you and all the distinguished delegates every success in the course of the days ahead and thank you very much for your kind attention.