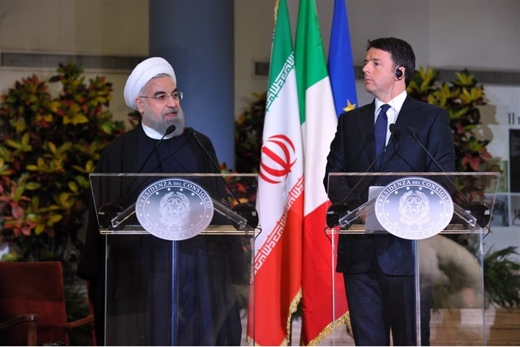 Italian Prime Minister Matteo Renzi described the July nuclear agreement and its implementation on January 16 as a new chapter in relations between Iran and the world.

Renzi made the comment here during a joint press briefing with visiting Iranian President Hassan Rouhani, who arrived in Italy on Monday.

The nuclear agreement, better known as the Joint Comprehensive Plan of Action (JCPOA), was also an important step toward bringing peace and stability to the entire region, Renzi said.

US and the European Union lifted anti-Iran sanctions after the January 16 report released by the Director General of the International Atomic Energy Agency Yukiya Amano who approved of nuclear program in Iran.

The JCPOA indicated that ‘if we could reach an agreement on nuclear issue, we will come to understanding about all regional questions,’ the Italian premier said.

Considerable cultural commonalities between Rome and Tehran can act as strong supporter for sustainable cooperation between the two nations, Renzi added.

Iran can play an effective role in ensuring peace in the region, said he, adding Tehran has also had active and important role in fight against terrorism.

Italy is serious in strengthening relations with Iran in all areas, Renzi said.