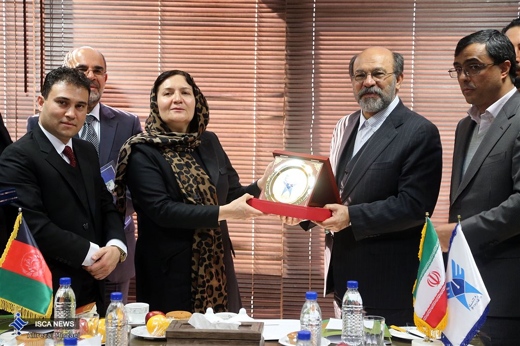 The Afghan minister of higher education has asked the Islamic Azad University to grant scholarships to Afghan students and hire them for research and science-based projects.

The president of the Islamic Azad University has said that IAU is ready to open branches in Herat and Mazar-i-Sharif in Afghanistan and launch medical and engineering programs in its Kabul branch.

Dr. Hamid Mirzadeh made the comment in a meeting earlier this week with Farideh Momand, the Afghan minister of higher education, and added that IAU and the Afghan ministry need to revise the already inked agreements and sign new deals to meet the Afghan needs.

ISCAnews.ir, the website of Iran Student Correspondents Association, published a report on the meeting on Monday. The following is the translation of part of that report:

The IAU president said that the Iran-Afghanistan friendship can be boosted by establishing scientific ties, adding that his university stands ready to cooperate with the Afghan professors and tap into their knowledge and experience in its branches inside Iran.

He went on to say that Iran and Afghanistan can contribute to each other’s scientific development, adding that under a proposal by the Afghan minister the Islamic Azad University can grant scholarship to the Afghan students in different majors or help them get scholarship at a discount.

The visiting Afghan minister, for her part, said that the Islamic Azad University is one of the top, reliable universities in Iran and the world, adding that the two neighbors which share cultural, religious and linguistic traditions can cement their ties by cooperating on the academic front.

Ms. Farideh Momand then urged the IAU to cooperate with Afghan graduates in research projects, expressing hope that Iran’s Islamic Azad University can set the stage for students in her country to attend college on scholarships.

She also asked the Islamic Azad University to carry out a needs assessment before adding new majors to the list of university programs it offers in her country.