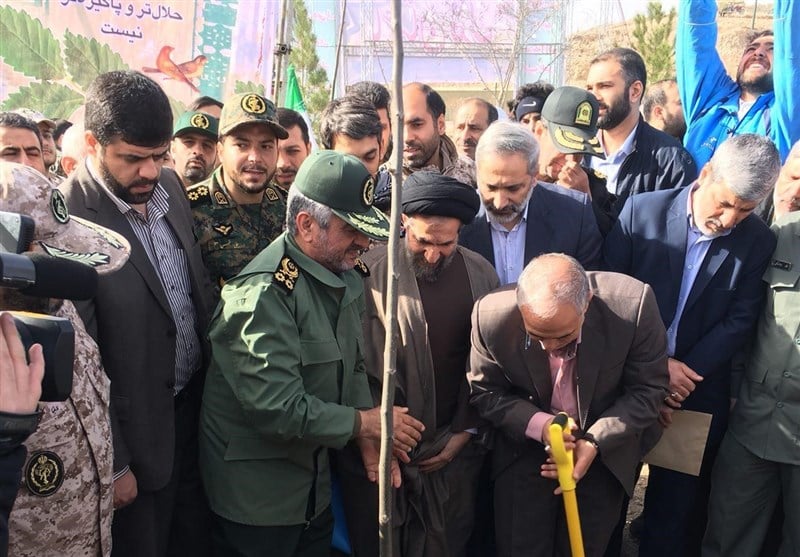 The Basij (voluntary) forces that are under command of the Islamic Revolution Guards Corps (IRGC) are ready to assist with tree planting programs across Iran, IRGC Commander Major General Mohammad Ali Jafari said.

Speaking to reporters on the sidelines of an event celebrating the ‘IRGC Tree Planting Week’ in Tehran on Saturday, Major General Jafari said the numerous forces serving in the Basij, who are under the IRGC’s command, are ready to provide various services in the country.

The Basij forces are ready to help in tree planting programs across Iran, particularly in high-priority areas like Khuzestan, the commander added, referring to a southwestern province of Iran that is struggling with heavy dust pollution and desertification.

Pointing to the IRGC-sponsored tree planting programs carried out in vast areas of Khuzestan and the sources of dust pollution, the general said such initiatives will continue in the coming Iranian year, which begins in less than two weeks.

It is up to the administration and the executive officials to tap into the huge potential of Basij forces in tackling environmental problems, he added.

On Tuesday, Leader of the Islamic Revolution Ayatollah Seyed Ali Khamenei planted fruit saplings to mark the national Week of Natural Resources, calling for efforts to protect Iran’s plants, forests and grasslands and to prevent destruction of trees in cities.