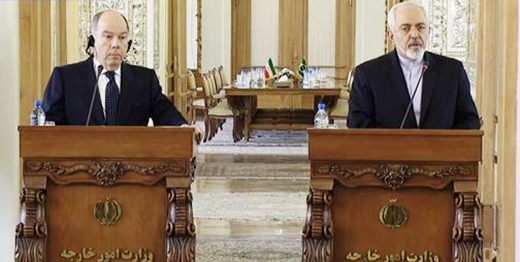 Grounds are prepared for boosting bilateral ties given commonalities between Iran and Brazil, Zarif said at a joint press conference with his Brazilian counterpart.

Foreign Minister Mohammad Javad Zarif has said the July 14 nuclear agreement between Iran and P5+1 was the victory of diplomacy over force.

At a joint press conference with Brazilian Foreign Minister Mauro Vieira in Tehran on Sunday, Zarif said the nuclear agreement, known as the Joint Comprehensive Plan of Action (JCPOA), was also the victory of rights over baseless claims.

He said that Iran and Brazil are two developing countries which have made great attempts in areas such as peaceful nuclear energy and added Brazil has played a “very active” role regarding the Iranian nuclear issue.

The Iranian foreign minister said Tehran and Brasilia have lots of commonalities, adding that Iran and Brazil are working to expand cooperation in various fields.

“Grounds are prepared for boosting bilateral ties given commonalities between the two countries,” Zarif said, adding that the two sides intend to exchange trade and economic delegations.

The Brazilian foreign minister, for his part, said Brazil and Iran established diplomatic relations more than a century ago and are “very good” partners.

He expressed his country’s willingness to improve cooperation with Iran through visits by the two countries’ ministers.

“The exchange of high-level ministerial visits is a very clear evidence of the importance that the two countries attach to each other and to the bilateral relations,” the Brazilian minister noted.

He praised the Vienna nuclear agreement between Iran and P5+1 as “historic and landmark,” emphasizing that JCPOA represents the victory of diplomacy and political dialog.

No justification for JCPOA violation

In response to a question about a future decision that the US Congress and Senate are to make on JCPOA, Zarif said there is no justification for the violation of the agreement.

“We had announced since the very beginning that we hold the government of the Unites States of America responsible for the implementation of JCPOA and any move by [US] Congress in contradiction to JCPOA should be stopped by US government. Otherwise, it will be a breach of JCPOA,” the foreign minister said.

Zionists and certain warmongers in the US have been against any agreement between Iran and P5+1, Zarif said, adding that they have failed to reach their objective of blocking an agreement.

The Iranian top diplomat emphasized that the next US administrations are also duty-bound to implement the Vienna agreement.

The foreign minister said Tehran is ready to take part in all international efforts to fight terrorism in the region, calling for the international community to play a more effective role in this regard.

Zarif said double-standard policies have unfortunately barred the international community from playing its part in tackling the issue of terrorism.

He added that Brazil believes diplomacy is the key to resolving regional problems.