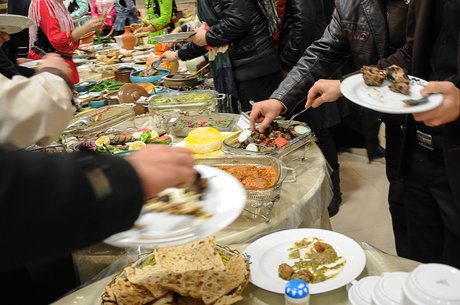 Ramsar, a city in Iran’s northern province of Mazandaran, is hosting the three-day Festival of Iranian Traditional Cuisine, Region 1, which started on July 20.

Delavar Bozorgnia, the head of Mazandaran Office of Iran’s Cultural Heritage, Handcrafts and Tourism Organization (ICHTO), announced that the Organization holds the Festival of Iranian Traditional Cuisine at 8 regions with the aim of propagating the culture of using local foods in restaurants and hotels.

The Festival of Iranian Traditional Cuisine has pitted numerous emerging chefs, from provinces of Gilan, Qazvin, Golestan and Mazandaran, against one another in challenges that test their culinary skills and creativity.

“An international jury will judge the skills of the competing chefs in cooking, preparing the main dish, dessert, appetizer and drinks,” Bozorgnia added, noting that people, too, are welcome to present their ideas.

Handicrafts and traditional foods are presented in 27 booths on the sidelines of the festival to offer an opportunity to different provinces to publicize their traditional products.

Bozorgnia went on to say that 50 booths of handicrafts and tourism attractions of Mazandaran have been set up.

“The festival is held twice a day in Ramsar’s Hotel Bam-e-Sabz,” he added.

Scientific and educational workshops are among the other activities planned for the festival, which are open from 7pm to 11pm.

Massoud Soltanifar, the Vice President and ICHTO Chief, also attended the closing ceremony of the festival.