Iran’s Exports to Eurasia Up by 75 Percent: Official 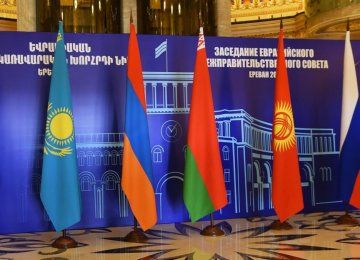 The Chief of Iran Trade Development Organization Hamid Zadboum says Iran’s exports to Eurasian countries have increased by 75 percent in value between March and November 2019.

“Most of the exports were to Armenia and Russia,” Zadboum stated in a meeting of the chiefs of the provincial branches of the Industry, Mines and Trade Organization.

Some training courses on export to Eurasia have been held in 15 provinces including Tehran and in 17 provinces exemplary exporters have been rewarded, he added.

Zadboum continued to mention that “the price of goods in the Iranian customs is decreasing” and that “the Committee on Valorization has reduced the prices given their volume.”

He added the Special Taskforce on Exports to Iraq has also been started. “We have two Iraq-based attaches.”

Iran and the Eurasian Economic Union signed a three-year provisional agreement in Astana on May 17, 2018, for the bloc to welcome Iran into EEU.

The arrangement, which lowers or abolishes customs duties, is the first step toward implementing free trade between Iran and the five members of the union.