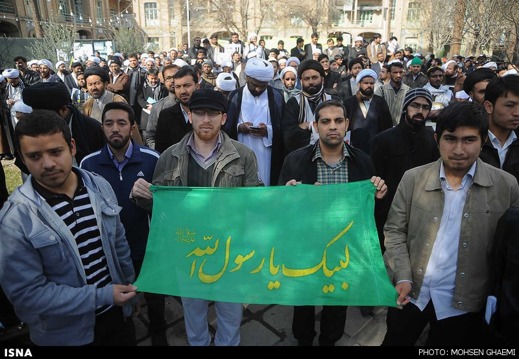 The protesters chanted ‘Islam will be victorious’ and carried placards in condemnation of the cartoons insulting the Prophet Muhammad.

Large crowds of Iranians staged a rally on Monday outside the French embassy in Tehran to protest against the insulting cartoons of Prophet Muhammad published on the cover of French weekly Charlie Hebdo.

The protesters chanted ‘Islam will be victorious’, ‘Israel is destroyed’ and ‘Down with France’, and carried placards in English, French, German and Arabic, saying that ‘My Prophet is Muhammad (PBUH).’

Iran has already condemned the ‘provocative’ publication of a new insulting caricature of the Prophet Muhammad (PBUH) on the cover of Charlie Hebdo, calling it an insult to Islam.

Iranian Foreign Ministry Spokeswoman Marzieh Afkham said the publication of the insulting cartoon “provokes the sentiments of Muslims the world over.”

In remarks on the sidelines of nuclear talks in Geneva, Iran’s Foreign Minister Mohammed Javad Zarif called for mutual respect among different cultures.

“We believe that sanctities need to be respected and unless we learn to respect one another it will be very difficult in a world of different views and differing cultures and civilizations,” he told reporters.

“I think we would have a much safer, much more prudent world if we were to engage in serious dialogue, serious debate about our differences and then what we will find out that what binds us together is far greater than what divides us,” he said.