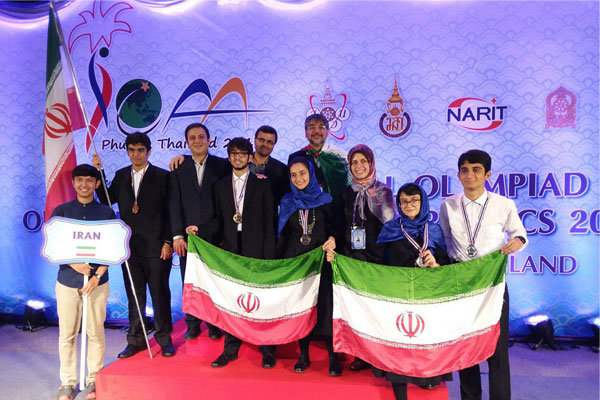 A team of Iranian high-school students have ranked third at at the 2017 International Astronomy and Astrophysics Olympiad in Thailand.

Head of the National Centre for Excellent Talents and Young Researchers, Fatemeh Mohajerani, said the champions of Iranian Astronomy Team have managed to receive one gold medal, three silver medals and one bronze medal at the 11th edition of the International Astronomy and Astrophysics Olympiad in Thailand.

“The Iranian team ranked third after the US and Thailand as the first and second team respectively,” she added, according to a Farsi report by Tasnim News Agency.

During the competition which was held from November 12 to 21 in Thailand’s Phuket, Shayan Azizi received a gold medal, Amir Hossein Sotoudeh Far, Zahra Farahmand and Parimah Safarian bagged one silver medal each and Sina Bolouki won a bronze medal.

The medals have contributed to the scientific achievements of the Islamic Republic of Iran at international arenas.

Mohajerani also said the Iranian team is set to return on Thursday, November 23 through Imam Khomeini International Airport. They are expected to be warmly welcome by their families as well as officials from Iranian education ministry as well as the National Centre for Excellent Talents and Young Researchers.

The 11th edition of the International Astronomy and Astrophysics Olympiad was attended by students from 45 countries.

The International Olympiad on Astronomy and Astrophysics (IOAA) is an annual astronomy competition for high-school students. It is one of the international science Olympiads.