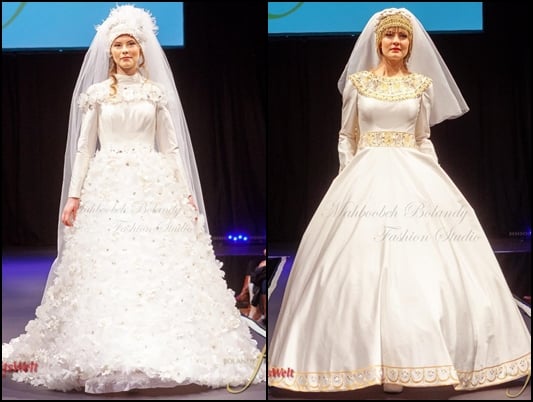 The Berlin Bride festival has been held annually, but the presence of an Iranian fashion designer at the event over the past two years has come into the spotlight.

Fashion designer Mahboubeh Bolandi, who has managed to create some 200 direct and indirect job opportunities over the past 15 years, has been front-page news with her presence at the festival, reported IRNA.

She says European models put on the clothes of different brands at the festival and hit the catwalk to draw the audience’s attention. During the event, the manager of each brand rents a few models to show off his/her products on the stage.

Other Islamic clothes designed by the same Iranian designer and entrepreneur, including mantillas and party dresses, were also warmly welcomed by the models at the event.

According to Bolandi, Iranian brands and Islamic clothes were not allowed to take part at the 2017 event. She says she managed to attend the festival at the 2018 festival, and that she was officially invited by festival managers to attend the event in 2019.

She says she tries to take to international festivals in 2020 a number of her colleagues working in the field of fashion designing.

Kayhan: 83% of women in Iran consider hijab as value