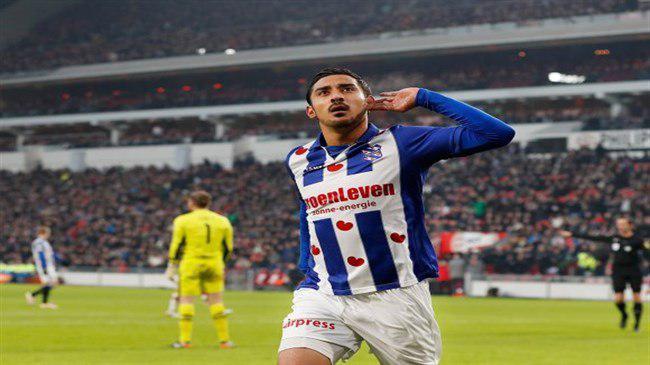 The Iranian striker Reza Ghoochannejhad scored a hat-trick in Heerenveen’s match against PSV Eindhoven on Sunday to become the Eredivisie’s top scorer with 12 goals at the end of the 19th week.

Ghoochannejhad has played a total of 1,651 minutes (more than 18 matches) for Heerenveen and has scored one goal every 138 minutes.

In the most thrilling match of the 19th week at the Philips Stadion, PSV scored two late goals to steal a thoroughly entertaining 4-3 win over Heerenveen.

The host found itself behind in the fifth minute when Ghoochannejhad broke the deadlock, but went into halftime ahead after goals from Davy Propper (32′) and Gaston Pereiro (40′).

Ghoochannejhad was again the man to get his side back into the game when he made it 2-2 in the 54th minute before Pereiro missed a 76th minute penalty.

It seemed as if PSV was going to pay dearly for that miss when Ghoochannejhad completed his hat-trick to put Heerenveen ahead, Iran Daily reported.

However, a stunning late surge from PSV produced goals from Marco van Ginkel (89′) and Hector Moreno (90′) as it stole the win at the death.

PSV Eindhoven scored two late goals to secure a thrilling 4-3 victory over Heerenveen in the Eredivisie on Sunday.

The result kept PSV within three points of Ajax and eight of Eredivisie leader Feyenoord.