Iranian Sculptor’s Works to Be Displayed at Venice Biennale 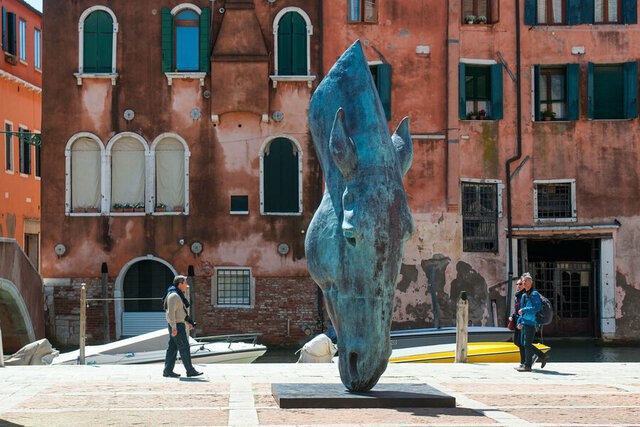 Iranian Artist Massoud Akhavan Jam has participated in the 58th Venice Biennale exhibition to put on show two of his largescale sculptures.

The two sculptures called “Dilemma of Man” and “Metamorphosis” are built to criticise social issues and also present Iranian mythology.

The two statues are made of stainless steel, which is twice as strong as steel, and is one of the most resilient new-age alloys, according to ISNA.

A human figure is shown with a pair of wings. One wing is the wing of the angel, while the other takes on a bat like appearance – that of the devil.

Metamorphosis (207 cm x 80 cm) gives a similar view of the society, this time suggesting that humanity must work together to achieve the greater good. Three figures can be decoded in the sculpture: a bull, an elephant and a deer. This combination is inspired by the Persian mythical figures of the Achaemenid Empire of Iran.

“Humanity has come a long way in terms of tolerating and accepting one another in order to coexist, but it seems like we still have far to go. This is where art can play a part, by demonstrating examples of this tolerance, and how far it can take us. These public sculptures are my plea to the earth to find the good in everyone, and use it to make the world a better place,” says Akhavan Jam.

Akhavan Jam’s industrial yet delicate forms draw on philosophy, contemporary socio-political issues and Persian mythology, so that within each work a didactic tale is contained.

This is the second consecutive edition in which Akhavan Jam participated with two statues.

The sculptures, Dilemma of Man and Metamorphosis are being exhibited publicly in Venice’s waterfront park, Giardini Marinaressa from May 5 to November 29.