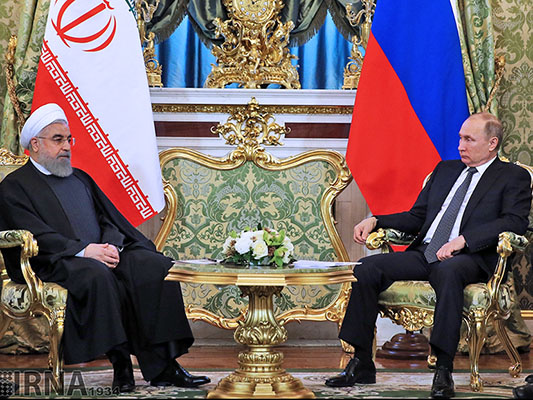 Iranian President Hassan Rouhani says the Islamic Republic and Russia have been working closely together to fight terrorism and promote stability in the region.

“Relations between Iran and Russia are aimed at promoting regional stability and the two countries’ main objective is to promote regional peace and tranquility,” Rouhani said in a meeting with Russian President Vladimir Putin at the Kremlin, Moscow, on Tuesday.

He added that Tehran-Moscow ties would never be against the interests of any third country.

Rouhani said Iran attached importance to strengthening relations with Russia, adding that the two countries had taken steps to bring about positive developments in mutual ties over the past three and a half years.

The Iranian chief executive emphasized that mutual relations had entered “a new phase,” saying, “In this new phase, we can speak about sustainable and long-term ties.”

The Russian president, for his part, said Iran was a good neighbor and a stable and reliable partner for his country.

Putin added that Moscow and Tehran worked very effectively together in all areas, including on global issues and the resolution of major and very grave international problems.

He also commended major achievements made by the two countries in recent years, particularly in the economic sector, saying that trade volume between Iran and Russia increased 70 percent in 2016 in comparison with the year before.

The documents were signed by senior Iranian and Russian officials in the presence of Rouhani and Putin following their talks.

Heading a high-ranking politico-economic delegation, the Iranian president arrived in Moscow Monday evening for a two-day official visit at the invitation of his Russian counterpart.

In a meeting with Russian Prime Minister Dmitry Medvedev on Monday, Rouhani said mutual relations were “growing” and stressed that relations would play an effective role in promoting regional and international stability and security.

Before the current meeting, Rouhani and Putin had held eight meetings over the past four years. Tehran and Moscow enjoy strategic relations with senior delegations from the two countries regularly exchanging visits.

The two presidents have also held several phone conversations and discussed the available avenues for the continuation of bilateral cooperation on the crisis in Syria and the fight against international terrorism.

Following their meeting in Moscow, the presidents of Iran and Russia took part in a joint press conference.

Addressing the reporters, Putin said in his talks with Rouhani, they had discussed further expansion of joint investment and technology transfer between Tehran and Moscow.

He added that special attention was also paid during their negotiations to the continuation of cooperation on peaceful nuclear energy between the two countries.

The Russian president said the first unit of Bushehr nuclear power plant, in southern Iran, is now operating at full capacity, noting that his country was also planning to build the second and third units at the facility.

He added that Moscow has extended 4.2 billion dollars in loan to Iran for the construction of a thermal power plant and electrification of a railroad connecting the central Iranian city of Semnan to northeastern city of Incheborun.

Pointing to similar stances taken by Iran and Russia on a variety of regional and international issues, Putin said the two sides had reiterated their determination to continue fighting terrorism and extremism in the region.

He noted that the two countries had agreed to press ahead with the campaign against terrorist groups operating in the region, particularly Daesh and al-Nusra front.

The Russian president also stressed the importance of establishment of a lasting ceasefire in Syria through cooperation of Russia, Iran and Turkey, noting that both Tehran and Moscow attached importance to the restoration of security to the crisis-hit country.

The Iranian president, for his part, said he had discussed the situation in Syria and Yemen with his Russian counterpart.

Rouhani said the two sides had reviewed ways of improving regional peace and security and establishing close relations among nations and countries in the region.

Iran’s chief executive added that Tehran and Moscow would continue their campaign against terrorism until terrorism is eradicated across the region.

He further hailed Russia’s role in striking and implementing a landmark nuclear agreement, known as the Joint Comprehensive Plan of Action (JCPOA), between Iran and the P5+1 group of countries and said Tehran and Moscow would further bolster cooperation in this regard.