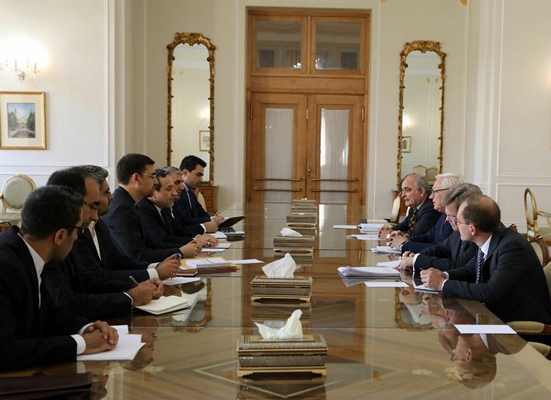 During the Wednesday meeting, the two sides discussed the latest developments in mutual ties, the Joint Comprehensive Plan of Action (JCPOA), and regional and international issues.

Araqchi and Ryabkov particularly conferred on Iran’s recent move to reduce its commitments under the deal.

They also called for the continuation of consultations among the remaining parties to the JCPOA and their mutual and multilateral cooperation with Iran to meet the Islamic Republic’s demands and pave the way for removal of the US illegal sanctions.

The Iranian deputy foreign minister referred to the obstacles in the way of implementing the JCPOA and pointed out that it is now the turn of the remaining signatories to adopt some practical and tangible measures to preserve the nuclear accord.

For his part, the Russian diplomat appreciated Iran’s patience over the past year and underlined his country’s support for the JCPOA. He also said that Russia will continue its efforts to preserve the nuclear deal.

During the talks, the two sides also agreed to continue their close and intensive consultations at all levels and remain in touch until the next meeting of the JCPOA Joint Commission.

Ryabkov entered Tehran earlier in the day on a one-day visit for talks on the 2015 Iran nuclear deal.

He told reporters ahead of the trip that he was headed to Tehran to discuss the agreement in the wake of Iran’s recent decision to stop fulfilling some of its commitments in reaction to the US’ violations.

Iran has warned the European signatories of the deal that they have only 60 days to deliver their end of the bargain in the wake of a fierce pressure campaign by the US, which left the deal in May 2018.

Moscow has in the past days called for an extraordinary meeting of the Joint Commission of the JCPOA.