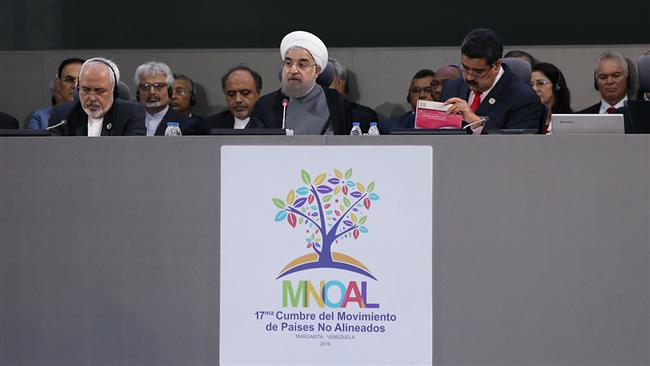 Iranian President Hassan Rouhani has held meetings with senior officials of the Non-Aligned Movement (NAM) in Venezuela, calling for stronger unity among independent states in pursuit of their common goals.

On the sidelines of the 17th NAM summit on Margarita Island, Venezuela, Rouhani sat down for talks with Bolivian President Evo Morales on Saturday to discuss the enhancement of Tehran-Sucre ties in different areas.

“There is no limit to the expansion of bilateral cooperation between Tehran and Bolivia. The strengthening of such ties will be in line with the interests of both nations,” Rouhani said.

He further emphasized the need for all independent nations to stand united in efforts to pursue their common objectives, saying the Islamic Republic welcomes closer relations with Latin American states, especially Bolivia.

During his stay, Rouhani also met with Ecuador’s President Rafael Correa on Margarita Island, where the two senior officials emphasized the need for enhanced bilateral ties in all spheres.

Rouhani said Iran and Ecuador have taken common positions on different issues of regional and international significance, adding that such commonalities necessitate closer relations between the two nations in various fields.

The lifting of anti-Tehran sanctions as part of last July’s deal on the Iranian nuclear issue could serve as a good opportunity for Tehran and Quito to strengthen their relations.

“We are fully prepared to offer our experience and capabilities in the fields of science, technology and energy to our friend Ecuador,” said Rouhani, adding, “In order to create dynamism in relations between the two countries, especially in private sectors, the expansion of banking ties is of great significance.”

Correa, for his part, said his country is determined to further bolster bilateral ties with the Islamic Republic, saying the opportunity created by the removal of anti-Iran bans must be seized to that effect. 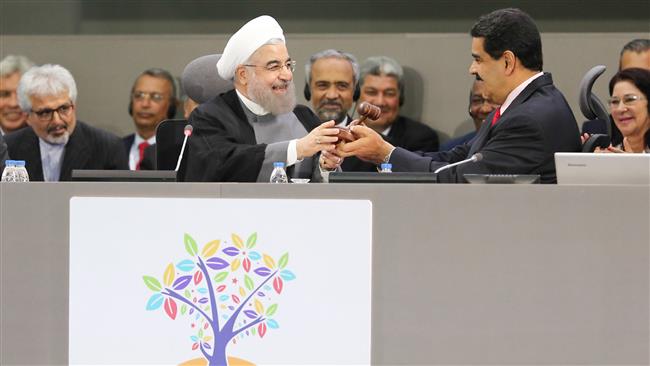 The Iranian president said the enhancement of bilateral relations will be in the interests of both nations as well as the entire region, which is suffering from extremism and terror threats.

Rouhani said the Iranian and Algerian nations have stood together during hard times, and must now work to broaden their economic relations after the lifting of nuclear-related embargoes against the Islamic Republic.

The top diplomat said Iran-Algeria ties have been based on independence, adding that Algiers is resolved to further promote brotherly relations with Tehran.

On Saturday, the Iranian president addressed the opening ceremony of the NAM summit. He officially submitted the body’s rotating presidency for three years to his Venezuelan counterpart Nicolas Maduro and expressed Iran’s support for him.

The NAM meeting brought together heads of state and delegates from all the 120 member countries to discuss key regional and international issues.

NAM, an international organization with 120 member states and 21 observer countries, represents nearly two-thirds of the UN members. It is regarded as not formally aligned with or against any major power bloc.