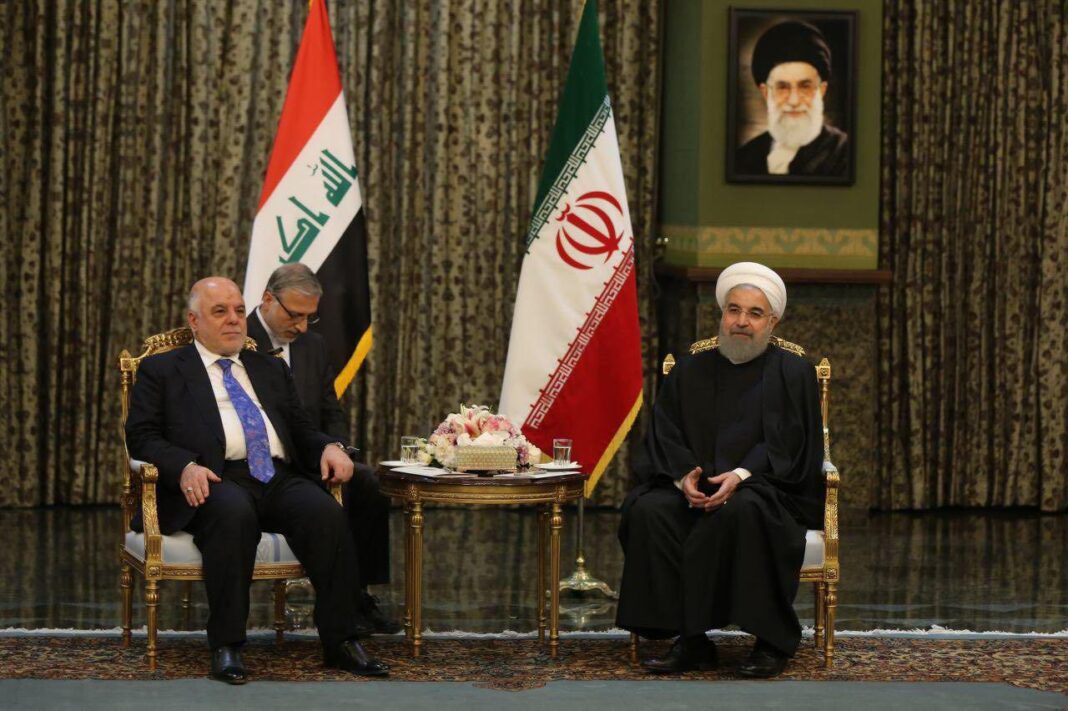 During the meeting, Rouhani said the Islamic Republic has always been and will be standing next to the Iraqi nation and government in fight against terrorism.

Rouhani also stressed that boosting unity and solidarity and preserving the territorial integrity of Iraq is of great importance to Iran.

Rouhani hailed the endless sacrifices made by the Iraqi people and officials, and also the wise views of the top Iraqi Shiite clerics in resolving the problems and crises in the country.
The Iranian president referred to the will of the two governments to develop relations and collaborations, saying that Tehran and Baghdad can expand ties in all sectors including economy, trade, investment, science and technology.

Rouhani further underscored that the Iraqi nation is gradually resolving its security issues and domestic problems, and efforts must be made to rebuild Iraq and develop the country’s regional relations.

“The Islamic Republic of Iran is fully ready to contribute to the reconstruction and development of Iraq, along with its government and nation,” noted Rouhani.

The Iranian president also added that boosting bilateral relations with the aim of developing trade and economic ties, as well as facilitating the issuance of visas, is a must in expanding relations between the two countries.

Speaking about the victories of the Iraqi government and nation against the terrorist groups, especially ISIS, Rouhani pointed out that “fortunately, the Iraqi army and people were able to overcome these problems by showing solidarity and making many sacrifices.”

“Providing security and improving stability in Iraq makes the Iranian government and nation very happy. The Islamic Republic of Iran regards Iraq’s security as its own security and the security of the region,” emphasized the president.

On the issue of Kurdistan region, Rouhani said the fight against terrorism and secessionist approaches that hurt the territorial integrity and national unity of the country should be continued, and Tehran supports the central government of Iraq.

“Iran has not only never sought to dominate the region, but has been a major advocate of security and has been at the forefront of the fight against regional terrorism. Today, we see no reason for more disagreements and tensions between the countries of the region.”

For his part, the Iraqi premier said that Tehran and Baghdad are enjoying deep friendship at the moment and should work together to boost the ever-expanding ties.

“The Iraqi government and nation have been able to win major victories by improving their abilities to fight the terrorists and preserving their unity,” said Abadi, pointing out that terrorism and terrorist tendencies today are a challenge and threat to all.

“Disputes and conflicts in the region provide conditions for the interference of others in the affairs of the regional countries; therefore, we must take steps to resolve the disagreements and develop cooperation among the countries of the region,” Abadi went on to say.

Abadi, who is in Tehran with a high-ranking delegation at the last leg of his regional tour, earlier met with the Leader of the Islamic Revolution Ayatollah Seyyed Ali Khamenei.

During the meeting, the Leader threw his weight behind the expansion of ties between Tehran and Baghdad in various fields.

He also expressed his support for the efforts made by the Iraqi government to develop relations with the neighbouring and regional countries, but warned Baghdad against trusting the United States.

The Americans themselves created ISIS, but now that the Iraqi government and people have inflicted a heavy defeat on terrorists, they pretend to be a part of this important development, Ayatollah Khamenei noted.

“Of course, there is no doubt that whenever they find the opportunity, they will deal a blow to Iraq again,” the Leader underlined.