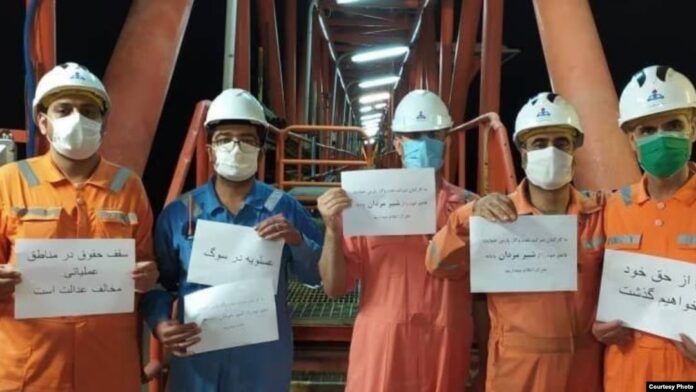 Thousands of Iranians working in the country’s energy industry have gone on strike over the past week in protest at low wages.

The oil workers have held widespread demonstrations across Iran, especially the oil-rich southern provinces, to demand higher wages and better conditions at the country’s oil facilities.

The viral videos circulating across social media show construction workers at 60 energy facilities leaving their jobs in protest at what Fars News calls a parliamentary bill that not only fails to increase the oil workers’ wages in the new year, but also decreases them.

In comments on Wednesday, President Hassan Rouhani pledged to resolve the oil workers’ grievances and tried to assuage fears over any economic reverberations.

Rouhani said the demonstrations held by Iranian labourers were mainly limited to private construction workers on temporary contracts at the plants.

The president claimed the strikes will not hurt Iran’s oil production and export.

“We do not have and we will not have any problem in the production, transfer, distribution and export of oil,” Rouhani said in a Wednesday meeting of his cabinet.

“I promise the workers of the oil industry that their problems will be solved,” he added.

While the changes made by the conservative parliament to the Rouhani administration’s budget bill have been the main cause of the workers’ grievances, the IRGC-affiliated Fars news agency has tried to downplay the parliament’s role to that of a match igniting fire at a gunpowder depot, which is eight years of dissatisfaction with the Rouhani administration’s performance.

Ebrahim Fouladvand says the Parliament’s move to decrease the maximum wage of oil workers makes them reluctant to work under severe conditions of the oil industry, which even puts their lives at risk.

“The only motivation left for the oil workers to work under such severe conditions and ignore the future problems and diseases is that they receive a relatively higher wage than other industries’ workers. But when you decrease their maximum wage at the Parliamentary law, you are stripping those workers of the only existing advantage,” he noted.