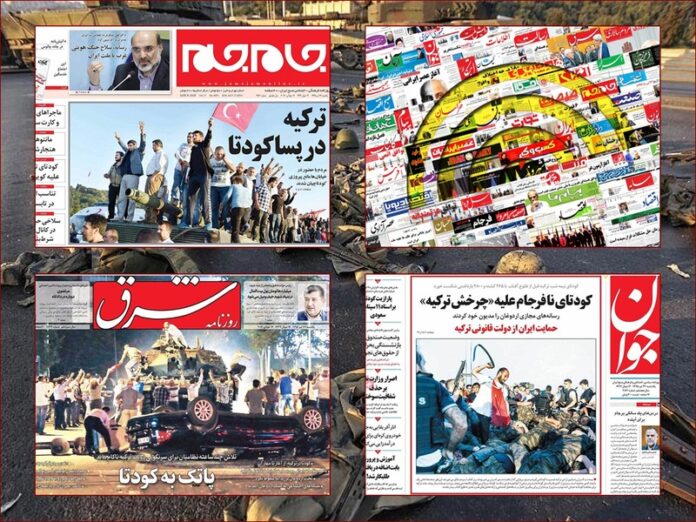 Iranian newspapers, most of which had not managed to cover the recent coup in Turkey in their Saturday issues as it had occurred in early hours of the day in Iran time, dedicated their front pages to the issue and covered the coup attempt in large scale. The way they covered the developments in Turkey will be reported in a separate story.

The Turkish coup as well as many other issues are highlighted in the following headlines:

1- Government Is in Control of Turkey’s Affairs: Failure of Coup Attempt

2- Democrats in Conflict with Republicans over Iran Sanctions Document

4- All Iranian Flights to Turkey Are Cancelled 1- People against Coup d’état: Iran Satisfied with Failure of Coup in Turkey

2- Iranian Tourists Insist on Visiting Turkey in Spite of Tensions!

3- Boeing Chief: In Plane Sale to Iran, We Obey US Administration, Not the Congress 2- Addiction Commission to Be Formed in Iran’s Parliament

3- Rouhani Has Isolated the US in Int’l Community: Former MP 1- Coup in Politics, Fire on Business: Turkey Is Iran’s Most Important Route to Europe

4- Criminal Act in Nice, France, Is a New Dangerous Method of Terror: Rafsanjani 3- Number of Cinemas in Iran Not Enough 1- Return of Erdogan: Will the Coup Change the Sultan’s Path?

2- Imam Khomeini’s Grandson: I Don’t Like to See Trump’s Election as US President

3- Trips to Turkey Banned for Now 3- Concerns over 25% Increase in Migrations to Tehran 2- May the Sultan Be Healthy! Erdogan Can Now Get Rid of His Opponents 1- Erdogan, the Winner of 10-Hour Coup: Why the Coup Failed in Turkey?

2- All Iranian Tours to Turkey Are Cancelled 2- Coups Have No Place in the Region: Zarif 1- One Coup and Several Speculations: How Turkey Sank in the Swamp?

2- Hollande’s Blatant Lie about Nice Attacker: He Was a Muslim!

4- US Increases Sanctions against Cuba after Normalization of Ties 1- Short Coup: ‘Refinement’ of Army and Judiciary by Dismissing Many Judges and Military Officers

4- Messages and Repercussions of a Coup [Editorial] 2- Amid the Fire in Middle East, the Islamic Iran Is a Garden: Cleric

3- Countries without Any History Are Creating Histories for Themselves 2- Turkey Foils the Coup, But Is This the End?

3- Moving forward on Waves of Violence, from France to Turkey 2- The Press Are Free to Criticize the Gov’t: Prosecutor-General 1- Sultan Erdogan: Winner of Coup in the Midnight! Hundreds Killed and Wounded in 45-Minute Coup

4- 15% of Illicit Drugs Smuggled into Iran Are Seized 1- Short Doping of Coup: Defeat of Turkish Style of Islam

2- What Iranian Media Did in Coverage of Turkey Developments: IRINN’s Great Performance 1- Turkey: Gone and Returned; Was It Really a Coup that Happened in Turkey? 2- The Show is Over Recep! It’s Time for a Rebellion [Editorial]

4- The “Almost Nothing” Deal Becomes 6 Months Old: What Happened to Promises for Openings in Banking Ties?

5- I Wanna Breath: Black People Talk about Their Problems in US