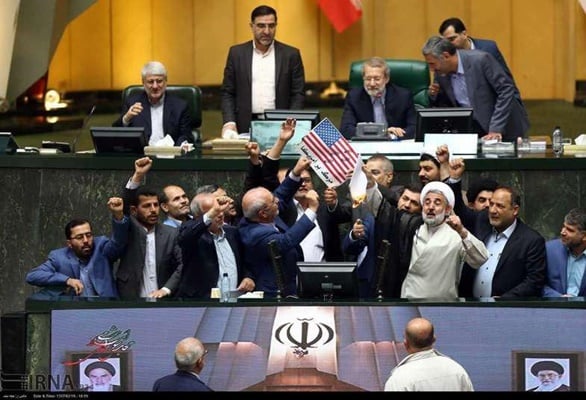 Iranian lawmakers are divided on what steps to take next following Donald Trump’s announcement that Washington will withdraw from the JCPOA, a move that prompted some legislators to set the US flag on fire on the Parliament floor.

In a controversial move earlier this week, a group of conservative lawmakers set the US flag and a copy of the Iran nuclear deal on fire while chanting “Death to America” on the Parliament floor.

Vice-Speaker Ali Motahari immediately slammed the burning of the US flag as irrational, saying that such moves insult the American nation, two-third of whom are reportedly against Trump’s decision.

Lawmaker Alireza Rahimi also wrote on his Twitter page that the move has no place in the Islamic culture and is rejected in political logic.

After seeing the US flag and a symbolic copy of the JCPOA being set ablaze, Parliament Speaker Ali Larijani dismissed Trump’s comments as cheap.

“Trump lacks rational competence, but Iran can bring him to his senses,” said Larijani, a report by Khabar Online said.

Although at this sensitive juncture Parliament is expected to unanimously support the government to confront the US, we are seeing different approaches at the legislature.

Hardline lawmakers, who were against the JCPOA from the outset and have, time and again, said ironically that the “deal was ratified in the Parliament in 20 minutes,” are seizing the opportunity nowadays to settle their political scores with the government.

Some of them have begun whispering that Iran should scrap the JCPOA, arguing that Europe is not reliable. Some MPs have described working with Europe on JCPOA as “out of the frying pan into the fire.” Some have called for Iran to pull out of the agreement.

However, some legislators while condemning Trump’s move believe that the efforts made by the Iranian nuclear negotiating team which led to the conclusion of the JCPOA should not go to waste.

“The honest efforts by the officials of the Islamic Republic of Iran should be appreciated, especially [efforts by] the nuclear negotiating team, which, under the guidelines of the Leader, held talks with major world powers and defended the rights of the Iranian nation,” read a statement by a group or lawmakers.

“Trump’s unwise move is a stain on [the record of] US authorities and shows their hegemonic temperament, and the flames of such behavior could spread to other nations and governments if it is not controlled by international circles, intellectuals and the public opinion in the US,” the statement also read.