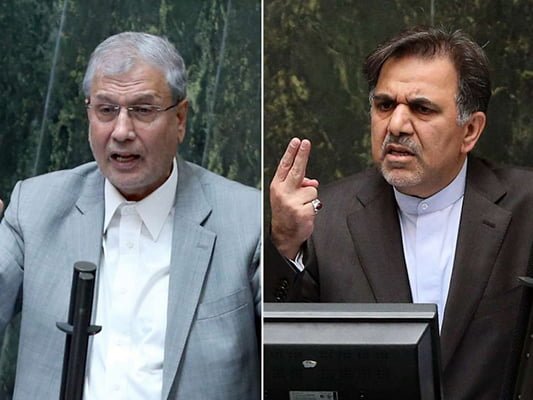 Iran’s Minister of Cooperatives, Labour, and Social Welfare Ali Rabi’ei and Minister of Roads and Urban Development Abbas Akhoundi have survived impeachment bids by the Parliament after securing a vote of confidence from lawmakers.

Rabi’ei attended an open session of the Iranian Parliament on Tuesday and defended his performance before the lawmakers. He finally managed to survive the impeachment by a hair’s breadth.

In the Tuesday session, Akhoundi also appeared in the Parliament to defend himself for the third time since he took the helm in August 2013. He had already survived two impeachment sessions.

He finally secured a vote of confidence as 152 lawmakers out of a total of 246 voted in favour of his reinstatement while 92 voted against and 2 abstained.

First Vice President Es’haq Jahangiri accompanied Rabi’ei and Akhoundi during the hearing at the legislature.

Rabi’ei has been under fire for the problems of labourers and pensioners as well as the incident that happened to Sanchi oil tanker. Akhoundi has also been a target of criticism in recent months, especially after the recent plane crash which killed 66 people.

Agriculture Minister Mahmoud Hojjati is also expected to attend a parliamentary session on Wednesday and defend his ministry’s performance before the MPs who have signed the call for his impeachment.