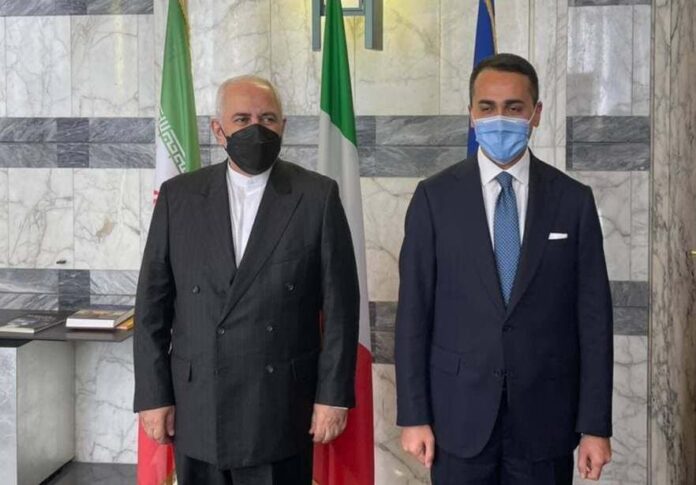 In the Monday meeting, the Iranian foreign minister reviewed bilateral collaborations in political, economic, and cultural fields, highlighted the historical relations among Iranian and Italian people and the 160-year-old ties between the two countries’ governments, and pointed to the existing capacities for economic cooperation, especially among private companies and small- and medium-sized enterprises of the two states.

He further highlighted the Iranian people’s positive attitude towards cooperation with the Italian side, and underlined the necessity of removing the barriers and preparing for resumption of interactions between the two sides’ economic sectors in line with the interests of Iran and Italy.

Referring to the virtual emergency meeting of the foreign ministers of the Organisation of Islamic Cooperation (OIC), where the Zionist regime’s racist and hawkish measures against the people of occupied territories and Gaza were strongly condemned, and also pointing to his meeting with the Damascus-based leaders of Palestinian groups, Foreign Minister Zarif elaborated on Iran’s principled viewpoint regarding the need for holding a referendum in which all Palestinians with any faith and religion can participate.

The Iranian top diplomat once again condemned the Zionist regime’s move to launch brutish attacks against the people of Palestine.

Issues related to cooperation with Persian Gulf littoral states and regional arrangements among the countries of the region, issues related to Yemen, Afghanistan, Iraq, and the latest developments pertaining to the Vienna talks were also discussed by Zarif in this meeting.

The Italian foreign minister, in turn, expressed his country’s interest in expanding its bilateral cooperation with Iran, especially in political, economic, and cultural fields.

He expressed support for the full implementation of the JCPOA by all parties, and called for active consultations and exchange of views with Iran on important regional and international affairs.

Italy is the second leg of his European tour which earlier took him to Madrid, Spain.

The Austrian capital of Vienna was also on his itinerary, but the visit was called off in protest at Austria’s move to hoist the Israeli flag on top of government buildings.

Zarif’s meeting with his Italian counterpart coincided with the delivery of 1.4 million doses of Italian-made AstraZeneca vaccines to Iran.