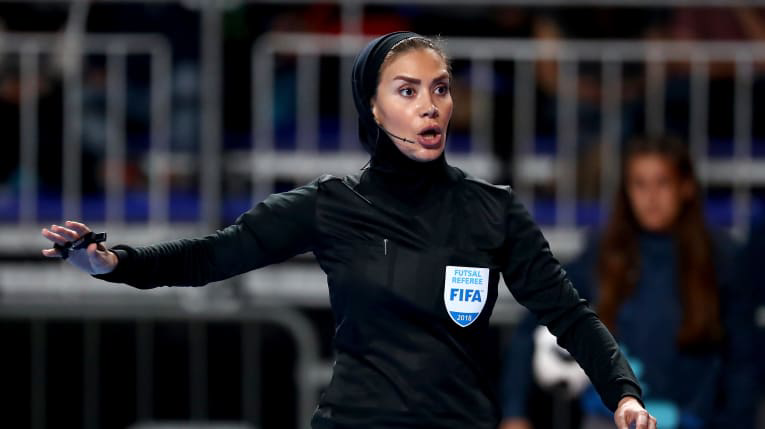 An Iranian woman will be the first female referee of the country to appear in the FIFA world cup.

Gelareh Nazemi’s greatest sporting dream has come true and she will be judging matches at the Men’s World Cup.

2021 Futsal World Cup will be held in Lithuania and Gelareh Nazemi along with Ebrahim Mehrabi Afshar are the two Iranian referees of this cup. Nazemi has earlier refereed in the World’s Clubs Cup, Youth Olympics, and World Cup qualifiers in the Asia for men’s futsal, but the World Cup is different for her. However, she does not want to be the referee of the final match of this cup because she would like to see Iran in the final.

Q: Do you have a dream greater than refereeing in the World Cup?

A: No. This was my biggest dream. Refereeing in the World Cup is something that everyone cannot experience. Every time I have refereed in an important competition I have said it and this time I say it is the result of the efforts made by all the referees in Iran.

Q: This is the first time an Iranian female referee has been invited to such a competition. Do referees from other countries have similar experience?

A: No. This is the first time that female referees have been invited to the World Cup. Although the Europeans have experience in the Men’s League and other competitions, it is normal for them to referee men’s competitions, but it is the first time they have been given the opportunity to referee in the World Cup. I looked at the list, I do not know all the referees and the names of some of them do not indicate whether they are male or female, but among the ones I know there are Italian and Russian referees. Most likely, we may have a female referee from the Americas.

Q: Except you, Zari Fat’hi was also nominated for these games but she was not selected.

A: Four Iranian referees were nominated. This is an important event. We are the only country with four referees at this level. It shows the power of our referees.

Q: But there is always a lot of criticism about refereeing in Iranian leagues.

A: The referee and the refereeing are not detached from objections. It is rare for two teams to be satisfied with refereeing in a game. I admit there are always mistakes, but the number of our football and futsal referees and their abilities are supreme. I consider myself the representative of these referees. There are many referees like me and better than me in Iran who have worked much harder but have not been seen.

Q: This success would not have been possible without the restriction of men’s participation in women’s football and futsal.

A: I agree. In many places, our women have been left out. These restrictions have led to opportunities.

Q: You have been given to judge at the highest level of futsal in the world. Don’t you regret why it is not possible for you to referee men’s competitions in Iran?

A: I have been refereeing since 2001. It was a long journey and I have been seen thanks to the media. We should not say that you have to referee men’s games in order to be seen. Everyone can be seen, wherever they show their best performance. It would be unfair to say that there is no support. I have never had a problem refereeing matches I have been invited to. Nobody told me you could not go. The federation and others have always supported me. Our team is in the World Cup, journalists are also in the competitions and they support me as before.

Q: You must have a lot of congratulatory messages in the past few days. Which message did you like the most?

A: I had messages from people from different walks of life, even from those who have nothing to do with futsal and refereeing. I am very happy to see our people happy with other’s successes. The best message came from a friend I do not know; she has planted a tree in my name. There were also friends who baked cakes and wrote my name on it. All these messages were exciting to me.

Q: Which team in the World Cup would you like to referee?

A: In the World’s Clubs Cup, I wanted to referee Barcelona’s game and I did. It makes no difference to me to referee for which teams here, but I would like to referee Brazil’s game just because of Falcao.

Q: And the final?