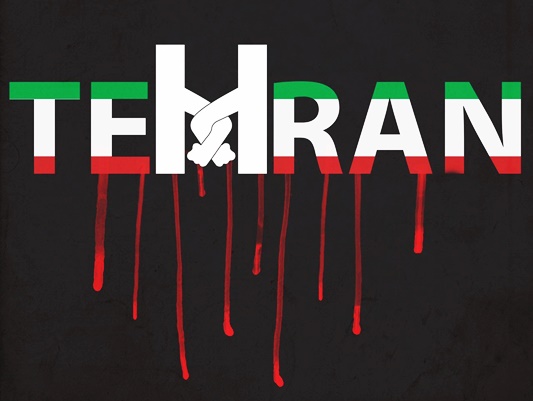 A large number of Iranian celebrities have reacted to the twin terrorist attacks in Tehran on June 7. They posted photos and messages on social media to demonstrate Iranians’ solidarity with each other. The celebrities also sympathized with the victims’ families and expressed their dismay at the violent assaults.

Following the terrorist attacks on Iran’s Parliament and the mausoleum of the founder of the 1979 Islamic Revolution, Imam Khomeini, a large number of Iranian sporting celebrities, cineastes and artists posted a vast and impressive array of messages on their Instagram pages in reaction to the assaults.

In their posts, they have shown the Iranian people’s solidarity with one another and sympathized with the victims’ families. They also warned enemies against future invasions and prayed for their country while expressing their dismay at the violent assaults. 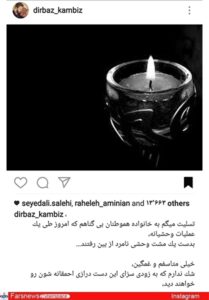 Kambiz Dirbaz, an actor, has posted a photo showing a lit candle in a black background, and written: “I condole with the family of my innocent compatriots who died during a brutal operation by a bunch of inhuman savages. I am very sorry and sad. I have no doubt that they [the terrorists] will soon suffer the consequence of their silly invasion.”

On her Instagram page, Behnoosh Bakhtiari, an actress with millions of followers, has posted a picture showing Iran’s national flag on which it is written: “We Are Together.”

Her message reads: “In case of noticing any suspicious cases, call 113 [the number of the public relations office of Iran’s Intelligence Ministry] and inform them. If any other cases [of invasion] happens, I, along with a large number of my companions, will fight against any enemy. We will stand together. We will even sacrifice our lives. Our message is clear.” 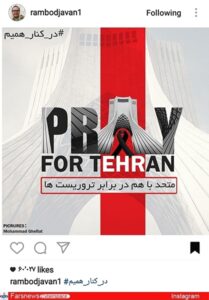 Two actors, Rambod Javan and Hamed Behdad, as well as Ali Daei, the Iranian football legend, have all posted a photo of Azadi Tower, the symbol of Tehran, on their Instagram pages on which it was written: “Pray for Tehran. We are united together against the terrorists.”

Talented actor Navid Mohammadzadeh posted a poetic message on Instagram, which reads: “We, who are the students of this elementary school [alluding to Iran], all belong to Iran’s sacred soil. In case, any enemy seeks to invade our hometown, we will sacrifice our lives and hearts willingly and free of charge.” 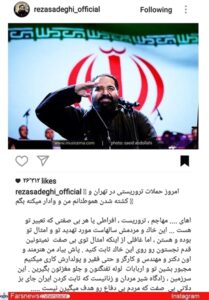 Reza Sadeqi, a singer, posted a photo of himself showing him giving a military salute in one of his concerts, with Iran’s flag in the background of the picture, and wrote: “Today, the terrorist attacks in Tehran which killed a number of my fellow countrymen, make me say: ‘Hey you invader, terrorist, extremist or any other adjective that describes you the best; this territory and its people have, for years, been threatened by you and people like you. Nevertheless, you have failed to understand one important fact: Insignificant people like you cannot set foot on Iran’s soil.”

“In case, the need would be felt, I as an artist, and my compatriots, from physicians, engineers and the rich to workers and the poor, will make you and your masters put the gun to your head [and get rid of yourself]. This land is the hometown of the lionhearted men and women who have proved that Iran is no country for cowards and insignificant people like you who fire at unarmed people,” he added.

Babak Jahanbakhsh, another well-known singer, has posted a picture of Iran’s map on which the national flag of the country is painted. The caption of the picture reads: “Oh, God! I supplicate you to keep away my country from three ills: Enemies, drought and lies.”

Dariush Farziaee, the host of a children’s TV show, has posted a picture of Iran’s national flag on which is written: “We are together.” 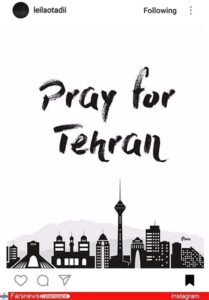 Kaveh Rezaei, the striker of Iranian football club Esteghlal, has also published a photo of Iran’s national flag bearing the caption: “We are together”. He also has sent his condolences to all Iranian people.

Leila Hatami, an actress, has posted a photo showing, in one frame, a number of Iran’s police forces, a firefighter and a photographer walking together at the time of the attack, to stress the unity of the Iranian people at the time of crises and danger.