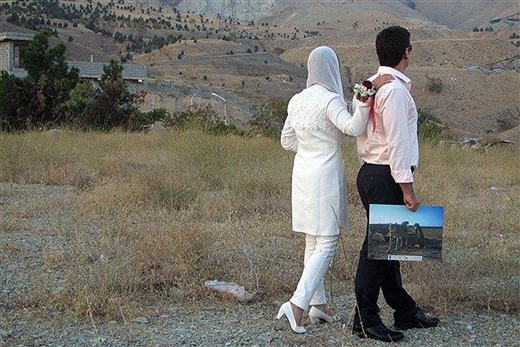 I decided to ask for the construction of a waterhole in the wilderness as my marriage portion because I blame human activity for the damage caused to animal habitant, the bride says.

A 29-year-old Iranian bride, who is an active member of the Iranian Cheetah Society and an animal rights activist, has asked for a very unusual marriage portion.

Jamnews.ir has filed a report on what has inspired the bride to tie her marriage to wildlife benefits. What follows is the translation of part of the bride’s remarks in the report:

One of my colleagues asked me a month ago what I was planning to ask for as marriage portion.

In answering that question, the idea of having something different which could fulfill my ambitions took shape in my mind.

I decided to ask for a waterhole in the wilderness as my marriage portion, because I blame human activity for the damage caused to animal habitant.

Overexcited with the idea, I contacted my fiancé and shared with him what had just occurred to me. My husband, who is a nature lover and breeds plants and flowers, welcomed the idea. We did some research on the waterhole construction and its costs and had my request officially registered in a registry office. My husband and I plan to finance the construction of more waterholes in the near future in a bid to take a small step toward the revival of the environment.

My contact with nature and wildlife has emboldened and empowered me to fight my problems. I have learned from animals that there is a solution to every problem and that I should not give up when I am unable to find a solution.

I owe what I have in life to signs that God has embedded in nature for us. They are like hidden treasures at the heart of Mother Nature. Upon discovery of those treasures you can lead a good life.

[Waterholes built by the Iranian Cheetah Society have a special structure which doesn’t allow access to animals like camels, but all wild animals such as wolves, hyenas, jackals, gazelles, deer, wild sheep and different kinds of birds can use them.]