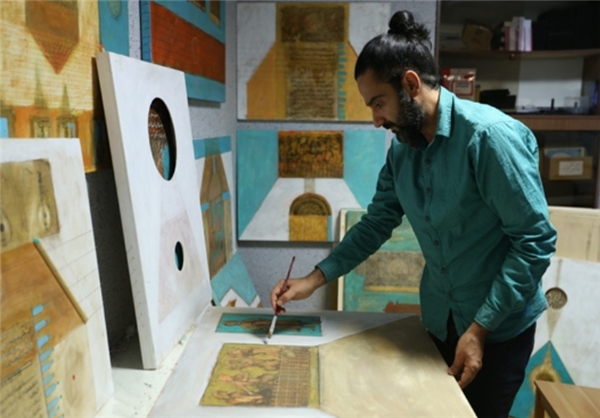 An Iranian artist has combined painting with music, allowing viewers to play some music while watching the artworks.

Pejman Tadayyon, an Iranian artist who has merged painting with music, believes that European music in the medieval era was changed under the inspiration of Eastern and Iranian music, and their church music also flourished because of Muslims’ presence in Southern Europe.

Tadayyon has been living, studying and doing art activities in Italy. Now in an unprecedented effort, he is combining the art of painting with music.

For the first time in the history of art, Tadayyon embedded wires and strings in his paintings and provided an opportunity for the viewers to play some music while enjoying the paintings.

With the help of Islamic Culture and Communication Organization and the Iranian cultural attaché in Italy, Tadayyon intends to launch his first painting exhibition in Tehran to display more than 30 of his works.

Here’s IFP’s translation of excerpts from Fars’ interview with him: 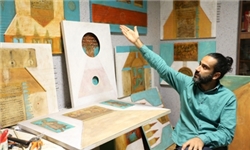 To the best of our knowledge, you were born in Isfahan, your grandfather was an artist and you grasped the primary concepts of art from him and some other Do you categorize yourself as a developer of a new painting style?

Nowadays, the painting arena is full of numerous styles and techniques to the extent that no painter can purport to invent a new one. I guess it will be an idle boast if someone claims so. What I did was just adding music to the philosophy of painting. My painting styles are symbolism and conceptualism.

We have witnessed many examples of combination in different fields of art, especially in music as it has grown a lot in recent years. As far as I know, however, no one has ever merged painting with music as you did. Is that true?

Just theoretically and philosophically. About a hundred years ago, a Russian painter named Wassily Kandinsky used to give his paintings names like symphony No. 2. He believed that viewers should be able to hear different pieces of music out of different paintings. Pragmatically, however, the viewer can play a piece of music in a painting for real; I have the honour to be the first. It should be noted that artists in other fields such as sculpture have done this before.

Given the fact that the theory was already there, why do you think painters never bothered to develop it into practice?

It is almost impossible because most paintings are painted on a canvas, which is a piece of cloth actually. Since I used to make Setar and Santur [musical instruments of Iranian origin], I managed to find an easy solution for it.

Just like this painting that we are looking at; inside these circles that you see in this painting, the entire musical modal systems of Iranians used to be written in letters like Abjad [a system of writing]. On the upper circles you can find information about a system of musical modal. I have tuned the same system on the lower strings. The viewer can play that piece of music easily. 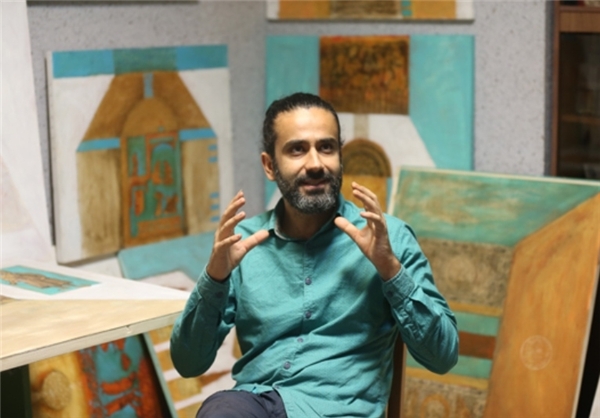 After years of painting, you are going to put your works on display for the first time in Iran. Has anyone ever done this before in the country?

A. Fortunately no one has ever tried that before in Iran; however, I guess we will witness more similar works from different artists soon.

Have you introduced your new style of painting in other countries too?

A. Just in Italy; but it was in limited scope.

How long have you been weighing up the idea and when exactly did you put the idea into practice?

I’ve been cooking up the idea for almost 10 years up until three years ago when I launched my first exhibition in Italy. I have being cooperating with eight well-known exhibitions in Italy to introduce my new art style.

I am going to further my cooperation with one of the famous exhibitions of Rome and display my works there too. They want to introduce me as the first artist who has combined painting with music.

I have started preliminary talks with several major galleries in France, Canada, and the US in an attempt to hold more exhibitions in these countries.

Is there any relation between the invitations you received for holding exhibitions in different foreign countries and the exhibition you held in Italy?

Yes, indeed, and I have plans to take up the invitations after I am finished in Tehran.

Looking at your works, we found that there is an underlying sense of eastern, Iranian spirit in them. Do you have the same opinion?

These works come out in several styles. Some of them are minimal and unadorned. In these paintings I have tried to observe the link between the Iranian literature, colour and music. Colours applied in all of my paintings are abundantly seen in the tiling of mosques and monuments in Isfahan [a city in central Iran].

In Italy, the cradle of the Renaissance, you have insisted on using Islamic-Iranian art style; could you tell us why?

Mathematics and astronomy have been of most interest in Islamic art. I have lived in Europe for many years. Although they speak of Renaissance all the time, they believe that if it wasn’t for the Islamic art in important cities like Tehran and Baghdad, Europeans would have never gained an understanding of the Greek art. If the Europeans had a chance to benefit from Greek art and books, it was all because of the translations conducted by Muslims.

In an attempt to represent the richness of Iranian art, I have tried to juxtapose a painting from a medieval church with two Iranian paintings that belong to the same period. I should add that, inspired by the eastern and Iranian music and the presence of Muslims in southern Europe, European music flourished in the Middle Age and underwent major changes.