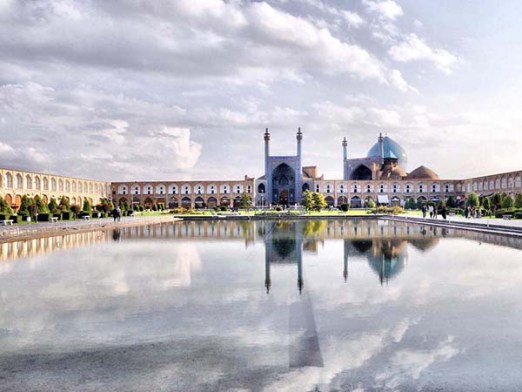 In an October special issue that focused on tourism and sustainable development, Safar (Travel) monthly, took a closer look through a camera lens at these World Heritage Sites, among them Isfahan’s Meidan-e Imam which is also known as Naghsh-e Jahan Square:

The square, a masterpiece of urban construction in the center of Isfahan, was built in the 17th century on orders of Shah Abbas, a Safavid Dynasty king. Naghsh-e Jahan, which means image of the world in Farsi, has been described as an Iranian equivalent to Saint Mark’s Basilica in Venice.

The square, which was registered as a UNESCO World Heritage Site in 1979, is 508 meters long and 160 meters wide. Two beautiful mosques, namely Masjed-e Imam and Masjed-e Sheikh Lotfollah, along with Aliqapu Palace, a six-story structure, surround the historic square.