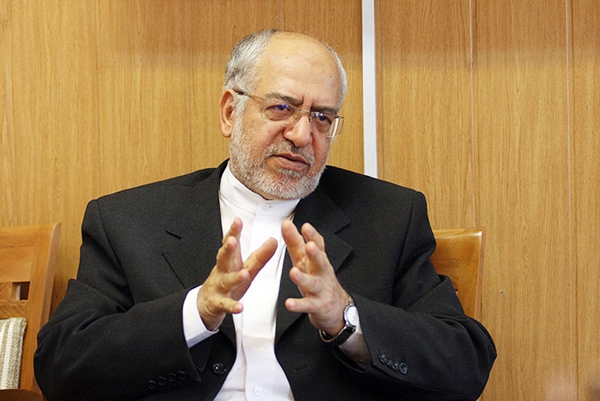 Industry Minister Nematzadeh has said that Iran, Afghanistan and Germany can make profitable investment in different mining and industrial sectors.

The minister of industries, mines and trade has said that Tehran supports long-term investment by German firms in different industrial sectors in Iran.

Mohammad Reza Nematzadeh made the comment in a meeting with visiting German Foreign Minister Frank-Walter Steinmeier on Sunday and added that to ride out the current trying times Iran needs to enter into partnership with German firms. The following is the translation of what else Nematzadeh said in the meeting:

Nematzadeh said that sanctions have downgraded trade and industrial ties between Iran and Germany, adding that after the termination of sanctions the stage will be set for Iran and Germany to have joint investment in the industry sector.

He further said that the German government largely helped solve questions surrounding the nuclear case, adding that Tehran hopes the results of the nuclear deal Iran and P5+1 inked can create better opportunities for the two sides.

Germany is one of Iran’s largest trade partners in Europe, he said, adding that German firms used to meet 50 percent of Iran’s industrial needs because Iranian companies attached great significance to the quality of industrial products, even if they carried a heavier price tag.

The Iranian minister went on to say that Iran is holding talks with a number of [foreign] companies so that it can start to carry out joint investment projects in the long run once the sanctions are lifted.

It is of great significance for Tehran and Berlin to have a joint market, Nematzadeh said, arguing that it can help educated Iranian youth exploit the experience of German firms and boost the synergy between Iran and Germany.

Nematzadeh said that he had productive talks with his Afghan counterpart and added that Iran, Afghanistan and Germany can make profitable investment in different mining and industrial sectors.

Termination of sanctions has opened up big opportunities to work with different nations on technical and industrial fronts, he said, adding that Iran is interested in developing cooperation with small-, medium- and large-sized German firms in different areas.

Iran has entered into talks with German companies on economic issues, home appliances and medical devices, Nematzadeh said, hoping that talks with Volkswagen Group (VW) will bear fruit soon and the two sides can start to work together.

“Sanctions threw a big obstacle in the way of the two countries’ banking cooperation. Unjust sanctions prevented Iran from using the money it had in the German banks,” Nematzadeh said and added that he is sure all problems will soon become history after the Iran trip of the German foreign minister.