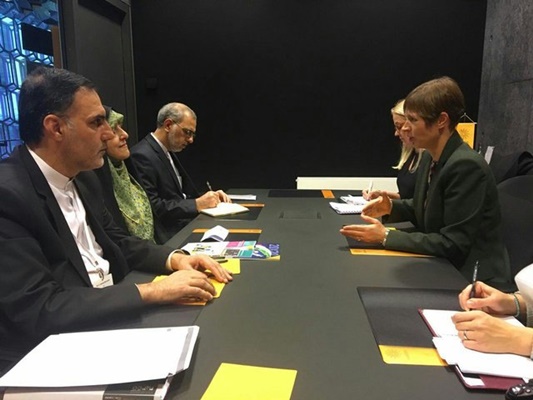 During the meeting, which was held on the sidelines of Women Political Leaders Summit in Iceland, Ebtekar touched upon diplomatic relations and business ties between Iran and Estonia, saying that the women and family affair is one of the most important issues in the development of ties.

According to a Farsi report by ISNA, Ebtekar added that spheres like IT, tourism, ecotourism and handicrafts are among other important areas for developing relations.

She also talked about the development of Iran’s interactions and trade after the nuclear deal.

In turn, Kaljulaid expressed her interest in developing cooperation with Iran in women affairs, pointing out that ICT today plays an important role in the development of the tourism industry and at the same time is considered as an appropriate field for economic empowerment of women.

Over 400 women political leaders from around the world met in Iceland on Wednesday for an annual summit aimed at promoting gender equality inside and outside of the political sphere.

The summit came amid the sexual misconduct scandal that has rocked the world of politics, as well as the entertainment and media industries.