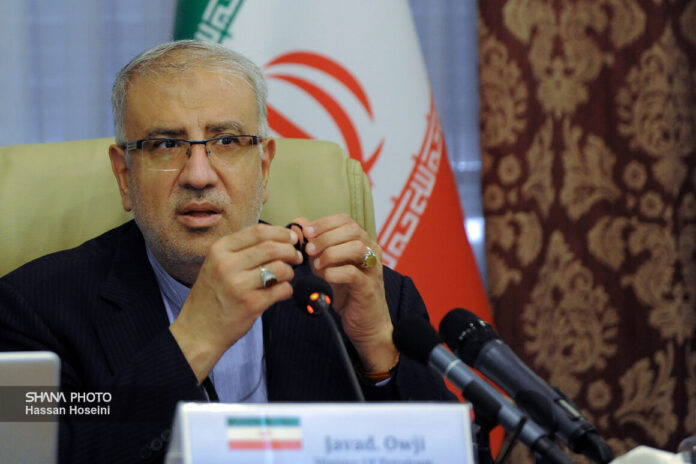 Iranian Minister of Oil announced unilateral Washington sanctions against Tehran will damage global law and multilateralism, targeting livelihood of people. Javad Owji made the remark while addressing the 23rd Ministerial Meeting of the Gas Exporting Countries Forum (GECF) which was held virtually on Tuesday.

Esteemed President of the 23rd Ministerial Meeting of the GECF, and

HE Yuri Sentyurin, Esteemed Secretary General of the GECF

It is a great pleasure for me to participate in the 23rd Ministerial Meeting of the Gas Exporting Countries Forum (GECF), as the Minister of Petroleum of the Islamic Republic of Iran for the first time.

I would like to express my sincere appreciation to our friend Bolivia for the successful holding of this meeting. I hope this Ministerial Meeting could take another step towards materialization of the goals of the Forum via adopting effective and strategic decisions.

In the past two years, as a result of the COVID-19 pandemic, the global economy and consequently the gas market, have suffered significant damages, the effects of which will cause fundamental changes and transformations in the world’s energy production and consumption paradigms, even in the medium term. Despite all the difficulties in the past two years, the GECF member countries have been able to manage the challenges and uncertainties in the gas market by adhering to the principles and goals set out in the Statute of the Forum.

Natural gas plays an important and key role in moving toward a low carbon sustainable energy system in the transition period, and due to its environmental and economic advantage, even with the growth of renewables, it could be part of the global green energy strategy to counter the impacts of climate change to promote sustainable energy supply.

Natural gas abundant resources in Islamic Republic of Iran, as well as other parts of the world makes this clean and affordable energy accessible to everyone so that they could achieve the 7th SDG approved by the UN.

I would like to stress that the global community should pay attention to common but differentiated responsibilities (CBDR) of developed countries toward developing countries, and provide them with proper opportunity to go through the energy transition period.

Technology transfer is a 50-year promise which faces numerous hardships, and developing countries especially gas exporting countries are in need of such technologies. Emergence of new policies in order to zero carbon emission, has necessitated reducing carbon volume produced in the natural gas production process, and in long-term the possibility of using new technologies such as CCUS and/or Blue Hydrogen and Methane leakage should be taken into account by developed countries. Otherwise, the attractive speeches of the leaders participating in COP26 in support of the Paris Agreement and the fight against climate change will be merely considered as speeches.

Natural gas security of demand is among important parameters ensuring adequate investment and enhancement of natural gas production capacity in the long-term. In this regard, constructive dialogue as well as cooperation with all the concerned parties including producers and consumers could guarantee natural gas security in supply and demand sides, which would be in favor of the two concerned parties. Hence, I believe promoting cooperation among GECF member countries in various fields: technology, development and gas market stability is pretty essential more than ever.

In order to overcome challenges of the world energy security; rather than adopting political approaches and imposing unilateral sanctions, a substantial strategy is required to restore economic logic and multilateralism.

Imposition of unilateral sanctions by the US on Islamic Republic of Iran will damage global law and multilateralism, and while targeting livelihood of people, and is in contradiction with principles and regulations of international law. This approach cannot ensure peace and international security and would not contribute to effectively deal with issues such as climate change, investment, technology transfer in energy field, particularly natural gas.

I am confident you all agree with me that achieving the elevated goals behind establishment of GECF requires further cooperation and coordination among the members. Holding one of the largest natural gas reservoirs and one of the world’s largest distribution networks of natural gas, Islamic Republic of Iran expresses its readiness to pioneer cooperation in all the relevant fields.

Islamic Republic of Iran warmly welcomes any collective or bilateral cooperation with gas producing countries. As minister of petroleum of Islamic Republic of Iran, I would make efforts to secure gas exporting countries interests and to support natural gas market stability. I am confident that promoting the level of cooperation and collaboration among the GECF member countries would enable us to cope with climate change challenges, and bring about a brilliant future for the GECF member countries.

As in the past, the administration of HE Dr. Raeisi the esteemed president of I.R. Iran will keep interacting constructively with the Forum, and will effectively support its objectives in line with securing the member countries’ collective interests.

I would like to conclude by expressing my sincere appreciation to the esteemed Secretary General and the GECF Secretariat staff for their round-the-clock efforts, and once again I would like to express my gratitude to the esteemed minister of hydrocarbons and energy of Bolivia for the excellent arrangement of the Ministerial Meeting.

Thank you for your kind attention!