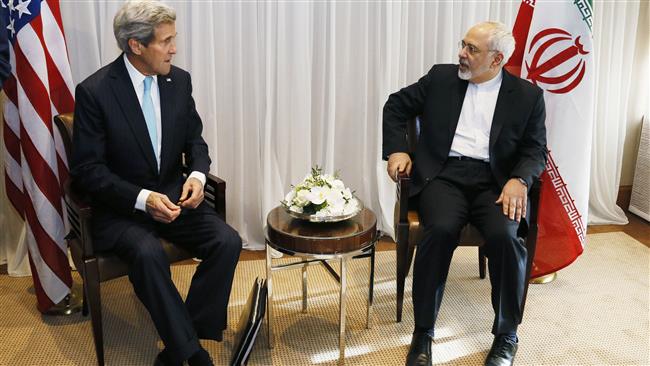 Top diplomats from Iran and the US have held talks on the sidelines of the World Economic Forum in Davos, discussing the need to speed up the nuclear talks.

Iran and the United States have held talks on the Islamic Republic’s nuclear program on the sidelines of the World Economic Forum in the Swiss city of Davos.

Iran’s Foreign Minister Mohammed Javad Zarif and US Secretary of State John Kerry discussed the latest developments about the nuclear negotiations between Iran and P5+1 on Friday during their fifth meeting in recent days.

Speaking to Iranian media after the meeting, Zarif said they discussed the need to speed up the nuclear talks.

Zarif and Kerry met in the French capital, Paris, on January 16 to try to narrow gaps over Iran’s nuclear program, in a follow-up to their lengthy January 14 meeting in the Swiss city of Geneva.

The latest meeting between Zarif and Kerry came as Iranian Deputy Foreign Minister for Legal and International Affairs Abbas Araghchi and US Under-Secretary of State for Political Affairs Wendy Sherman held a fresh round of nuclear talks in the Swiss city of Zurich on Friday.