Iran-Turkey Can Thwart Powers’ Plots in ME: First VP 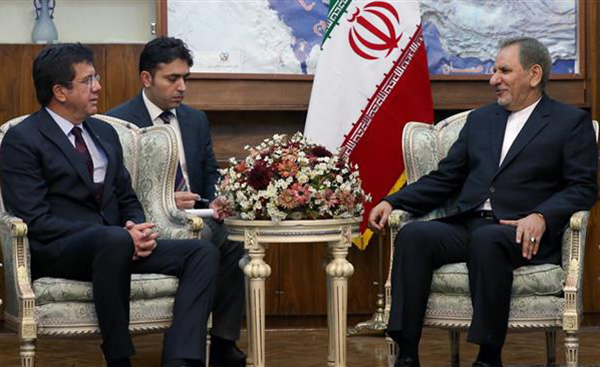 Iranian First Vice President Es'haq Jahangiri says Iran and Turkey may have different views on some issues in the Middle East but can thwart schemes devised by powers in the region.

“If Iran and Turkey reach a common understanding of the threats that powers have created in our region, they can put an end to their game,” Jahangiri said in a meeting with Turkish Minister of Economy Nihat Zeybekci in Tehran on Saturday.

He added that Iran and Ankara may have different views on certain regional issues but noted that such differences would never lead to a halt in Tehran’s support for Ankara in the face of regional threats and instability.

“Iran would not like to see Turkey sharing the same stance with Riyadh on issues such as Baghdad, Shia [Muslims] and Iran. Riyadh is supporting terrorists and Daesh and we have so far differentiated between the positions of Ankara and Riyadh,” the Iranian vice president said.

He added that Shias have never sought to cause sectarian strife and stressed the importance of collective efforts to restore stability to the Middle East at the earliest.

Jahangiri further expressed Iran’s keenness to improve relations with Turkey without any limitation and urged the two countries to speed up bids in order to remove the obstacles in the way of bolstering economic cooperation.

“The Islamic Republic of Iran welcomes the presence of companies of the friendly, brotherly and neighboring country of Turkey and we expect that these firms will have a more serious presence in Iran’s economy,” he said.

Iran and Turkey have differences over the crisis in Syria, but the two sides have been working to maintain close relations and stress the need for joint efforts to uproot terrorism.  While Iran supports the government of President Bashar al-Assad, Turkey backs the Syrian opposition groups fighting the government forces.

Since March 2011, Syria has been gripped by deadly militancy it blames on some Western states and their regional allies. More than 400,000 people have reportedly been killed in the war.

Zeybekci, for his part, said he is visiting Tehran with the purpose of holding talks with senior Iranian officials on ways to develop trade and economic cooperation.

He warned that the obstacles in the way of boosting trade relations would not be beneficial to either side and said the expansion of ties would serve the two nations’ interests.