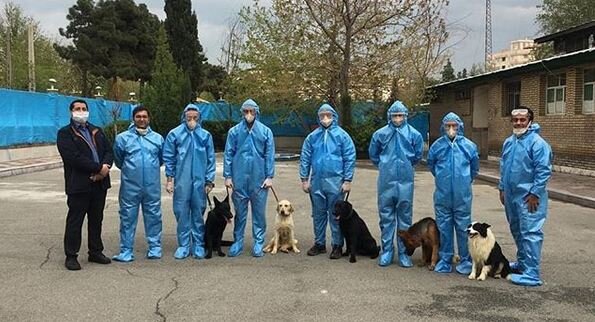 An Iranian centre for training search and rescue dogs says it is working with the military to train dogs to diagnose COVID-19 disease.

Hamidreza Shiri, a member of the project, told ISNA that dogs have already been used to diagnose malaria and other viruses.

Since dogs sense odours 20,000 times more than humans, they have already been able to detect some viruses, he added.

However, as the coronavirus is unknown and highly mutated, researchers have not yet carried out such a project. At present, we have taken the risk of this action, and the Army of the Islamic Republic of Iran has supported us in this regard, he went on to say.

So far, two stages of these trainings have been carried out in SK9 School and the final stage has been done at the centre of the military police near Imam Reza Hospital, he said.
“In this regard, in the first phase of the study, we proved that dogs do not get infected with the coronavirus, because dogs have been exposed directly to viruses for about two weeks, but several stages of testing have been performed and so far we haven’t seen any cases of virus transmission from dogs to trainers; therefore we can say dogs cannot be virus carriers.”

Hamidreza Shiri stated that he hopes to announce in the next 10 days that dogs can detect coronavirus. “Among the ten tests that are performed, dogs can identify the virus and say nine are negative and one is positive. We hope to be able to prove this to the world in the coming days,” stressed Shiri.

“Since this is a research project, we did not know which breed was more useful, so we used different breeds, including Labrador, Golden Retriever, German Shepherd, and Border Collie.”

He also asserted the study has not yet begun in other parts of the world; the United Kingdom has said it seeks to take action, but it is still in the research phase.

The budget the UK has requested for the project is over one billion dollars, while the army of the Islamic Republic of Iran supported the researchers.

“Getting help from dogs to diagnose the corona will have two phases. The first phase will be the use of dogs to diagnose people, and if a dog is trained, it can detect up to 700 cases per hour. Another phase is that dogs can be trained to distinguish between carriers and healthy people in crowded places such as shopping malls, barracks, airports, and so on.”

In the end, he said this research is very risky and the virus is just 20 centimetres away from the trainers. This is a project being carried out with the cooperation of SK9 School, Army of the Islamic Republic of Iran, Army University of Medical Sciences, Military Police Centre and Imam Reza Hospital.

Corona diagnosis by sniffer dogs is also being investigated in the UK. Working with the London School of Hygiene and Tropical Medicine and Durham University, the Medical Detection Dogs charity organisation believes dogs could learn the smell of coronavirus within six weeks to provide a rapid diagnosis.

Odour samples from patients infected with coronavirus as well as a sample group who do not have the virus will be given to dogs that are already trained in detecting conditions. If their training with COVID-19 is effective, the dogs could be sent to airports or public places to provide screening for the deadly infection.

“These dogs can screen up to 750 people per hour and would support ongoing efforts to test for COVID-19,” the charity said. “Once we have trained the first dogs and have set training protocols, we could engage other agencies, at home and abroad, to increase the number of working teams.”

Science Alert quoted James Logan, the head of the department of disease control at London School of Hygiene and Tropical Medicine, as saying that it is too soon for COVID-19 odour detection. We do not know if COVID-19 has a specific odour yet, but we know that other respiratory diseases change our body odour so there is a chance that it does. And if it does, dogs will be able to detect it. This new diagnostic tool could revolutionise our response to COVID-19.