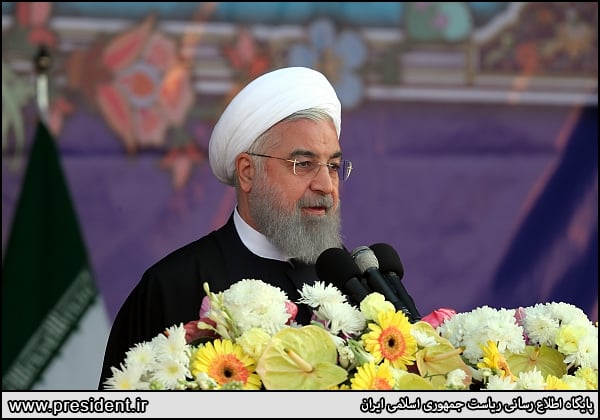 Iranian President Hassan Rouhani has vowed his government will do its best to help increase the country’s military power, saying Iran’s defence might could help promote peace in the chaotic Middle East.

Speaking in an annual parade held on the occasion of the National Army Day in Imam Khomeini mausoleum south of Tehran, the Iranian president said Iran is located in a sensitive region, which has in the past decades been the scene of numerous plots hatched by outside powers seeking to exploit the wealth of the West Asia.

“We are surrounded by aggressive powers who […] intervene in the region’s affairs against international law and invade countries without the consent of the UN and against its charter,” Rouhani said on Wednesday.

In a region where big powers are using terrorist groups as a tool to foster instability, Iran needs mighty military forces to foil their plots and do not allow terrorists to threaten this land, he added.

“Iran’s military forces have also managed to play a key role in [promoting] peace and security in the region,” he said, referring to Iran’s role in the fight against ISIS in Iraq and Syria.

“We tell the world that we will produce or obtain any weapons we need and will not wait for their permission,” he said.

The president was apparently responding to calls by Western powers, including Europeans, on Iran to stop developing ballistic missiles, as part of efforts to convince US President Donald Trump to stay in the 2015 nuclear deal.

Various units of the Iranian army started annual parades started in Tehran and other cities on Wednesday morning.

The Tehran ceremony was participated by Rouhani, Chief of Staff of the Iranian Armed Forces Major General Mohammad Hossein Baqeri and other senior military and government officials as well as foreign diplomats, military attaches and reporters.

The latest defence achievements produced by Iranian experts were also showcased during the parade, including Aftabaz passive radar system, a rapid-reaction command and control combat system and Kamin 2 and Seraj 1 missile systems.