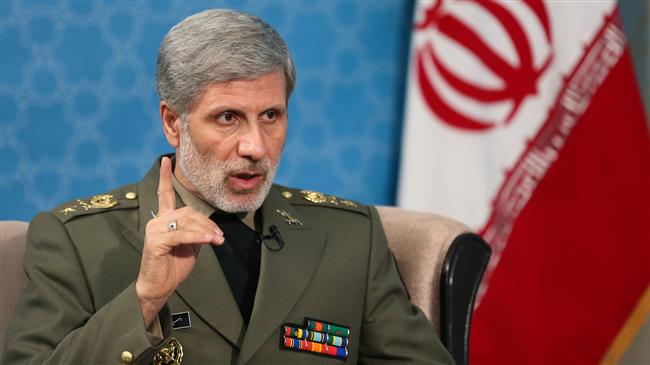 Iran’s defense minister says the Islamic Republic will give a "clear and direct" response to any possible Israeli threat against its interests in the Persian Gulf.

In an interview with Aljazeera network, published on Monday, Brigadier General Amir Hatami reflected on a recent measure by the United Arab Emirates and Bahrain to fully normalize relations with Israel through deals mediated by the administration of US President Donald Trump, noting that such a measure will pose a direct threat to security of the entire Persian Gulf region.

He added, “Any threat posed by the Zionist regime in the Persian Gulf [against Iran’s interests] will be faced with a direct and clear response.”

The United Arab Emirates and Bahrain signed the controversial normalization agreements with Israel at the White House on September 15, amid outrage across Palestine and the Muslim world at the Arab regimes’ betrayal of the Palestinian cause.

Trump, who presided over the signing of the normalization pacts, said “five or six” other countries were close to making similar agreements with Israel, but did not name them.

Reports say Sudan and Oman could be next in line to normalize with Israel.

The US-brokered deals make the UAE and Bahrain the third and fourth Arab states to take such steps to normalize ties since Israel signed treaties with Egypt in 1979 and Jordan in 1994.

Answering a question about the US insisting on inclusion of Iran’s missile capability in any possible future talks, Iran’s defense minister said the Islamic Republic will never engage in negotiations over its missile program with the US, emphasizing, “Nobody has the right to ask us to do this.”

Elsewhere in his interview, the Iranian defense chief pointed to the latest armed conflicts between Armenia and Azerbaijan over the Nagorno-Karabakh region and said the Islamic Republic has given stern and clear warnings to the warring sides about the need to protect security in the border areas.

Hatami said, “We expect Turkey, as a friendly and important regional country, to help settle the crisis in the disputed Karabakh region through diplomatic means.”

Karabakh is internationally recognized as part of Azerbaijan, but it is held by ethnic Armenian separatists backed by Armenia since 1992, when they broke from Azerbaijan in a war that killed some 30,000 people.

The conflict re-erupted in late September, leading to the worst fighting in decades in the region.

Baku and Yerevan agreed to a “humanitarian ceasefire” on Saturday after a Russian-brokered truce fell apart, earlier.

The two sides, however, accuse each other of violating the latest truce.

Late on Sunday, the separatist government of Karabakh said it had recorded another 37 deaths among its forces. The latest casualties pushed the toll to 710, Russia’s Interfax news agency reported.

The Iranian Foreign Ministry said on October 7 that it has delivered a note of protest to both Azerbaijan and Armenia over the extension of hostilities to the Islamic Republic’s territory in the ongoing fighting between the two ex-Soviet republics over the disputed Karabakh region.

Spokesman Saeed Khatibzadeh said that the Iranian Foreign Ministry had sent the official note to the Republic of Azerbaijan and Armenia to convey the country’s “strong protest” against the firing of bullets and shelling into the country, which “violated Iran’s territorial integrity, undermined its security and inflicted financial damage” on Iranian citizens.

His remarks came a day after the Iranian defense minister once again warned the warring parties involved in the military clashes that Tehran will take stronger measures than warnings if the shells fired in the fighting continue to hit the country’s border regions even by mistake.

“It is not acceptable at all that a bullet hits the Islamic Republic’s borders due to a mistake or carelessness,” Hatami said at the time.