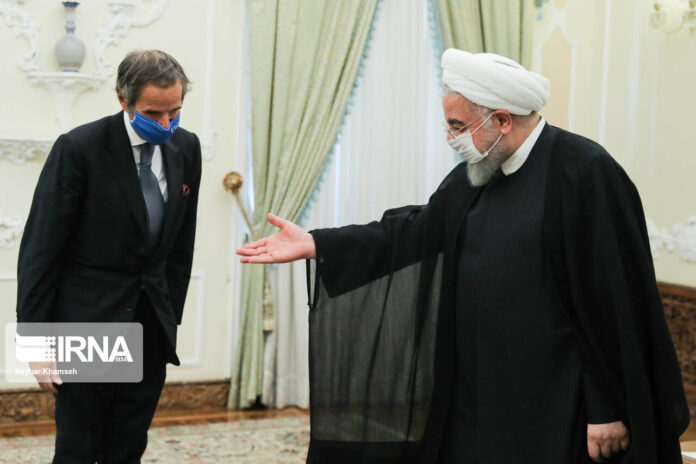 The Iranian president says the country will move forward with its cooperation with the International Atomic Energy Agency (IAEA) as before.

President Hassan Rouhani expressed hope the level of cooperation between Iran and the agency will increase day by day.

“In addition to its technical and specialized duties regarding the Safeguards Agreement and the Additional Protocol, which Iran is implementing voluntarily, the IAEA has an important responsibility, too, with regards to the JCPOA and the preservation of this multilateral agreement,” said Rouhani in a Wednesday meeting with visiting IAEA Director General Rafael Grossi.

Rouhani referred to the precise and expert reports prepared by the agency about the implementation of the JCPOA during the cooperation of the seven countries which were signatories to the deal.

“The JCPOA was a very important deal for Iran and the 5+1 group and brought about tranquility for the whole region and the world,” added the president.

Rouhani said the US withdrew from the agreement in 2018 for no good reason.
“More than two years on since the US pullout from the JCPOA, the American have well realized that what they did was not a right move,” said Rouhani.

“We hope the US will understand one day that days of unilateralism are gone,” he said.
He underlined UN Security Council members can very well feel the significance of the JCPOA.

President Rouhani said the US and one or two other countries are trying to wreck the JCPOA, saying, “We and the international community keep trying to preserve the JCPOA.”

He also said it is “very important” for the IAEA to remain independent, impartial and professional.

President Rouhani further touched upon the “good agreement” reached between the Atomic Energy Organization of Iran (AEOI) and the IAEA.

“The agency should pay attention to a very important point, and that is Iran has sworn enemies that are always seeking to create problems for us,” said the president.

“They are the ones that both possess nuclear weapons and refuse to work with the IAEA,” he said.

The IAEA chief, in turn, expressed content with the agreement it reached with the AEOI during his trip to Iran, and emphasized the need to boost cooperation between Iran and the Agency.

He said the JCPOA was an achievement in the true sense of the word and a major yardstick for all parties, adding, “We shoulder an important responsibility for preserving it.”
He expressed hope all issues as well as technical and professional questions will be settled through further cooperation between Iran and the agency.

Grossi said Iran-IAEA cooperation should not be affected by foreign voices.