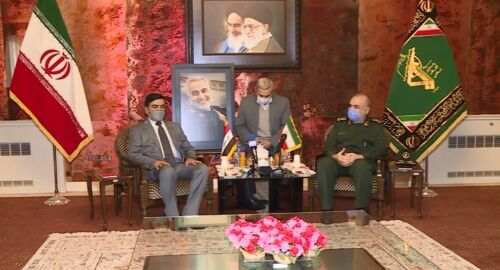 A senior Iranian military commander has told the Iraqi foreign minister that the Islamic Republic will definitely take vengeance upon the assassins of Lieutenant General Qassem Soleimani.

Major General Hossein Salami underlined that General Soleimani and senior Iraqi military commander Abu Mahdi al-Muhandis, who was assassinated along with him in a US drone strike in January, had a key role in breaking up the ISIS terrorist group.

The top Iranian general reiterated the plan to take vengeance has nothing to do with legal proceedings to bring the assassins to justice.

“Undoubtedly, in the world of Islam, General Soleimani along with Abu Mahdi al-Muhandis had the most determining role in toppling the ISIS and thwarting Zionist and American schemes in the region,” he said.

The IRGC commander noted that the US was dismayed at General Soleimani’s success, and that is why it decided to assassinate him.

General Salami then underscored the need for US troops to either withdraw from Iraq or be expelled from the country.

“The expulsion of American forces should be done in accordance with the enactments of the Iraqi Parliament, and this is what the Iraqi people want,” he said.

He then called for Tehran-Baghdad cooperation to ensure border security.
The top general said Iran would like to see an integrated, united and free Iraq which is not dependent on other powers.

The Iraqi defence chief, in turn, thanked Iran for helping Iraq fight the ISIS terror group while stressing the need for mutual cooperation on border security.

He also said his trip to Tehran is aimed at boosting mutual relations and asking Iran to provide the equipment that the Iraqi military needs.