In a Wednesday meeting, Zarif praised the resistance of the Syrian government and people against plots and their victory against the terrorists, saying that these victories made the US and the Zionist regime boost their destructive plans in favour of the terrorists.

The Iranian top diplomat also added that Tehran and Damascus had gone through more difficult stages in the past, expressing hope that the current important stages would be successfully passed.

In turn, the Syrian lawmaker appreciated the support of the Islamic Republic of Iran for the Syrian people in their fight against terrorism, noting that “Iran is our main partner in the resistance, victories, political process and reconstruction of Syria.” 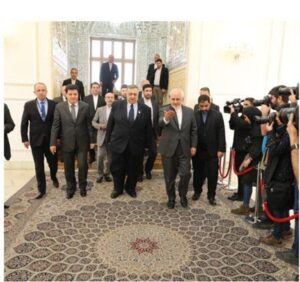 Referring to the holding of the 13th Session of the Parliamentary Union of the OIC members (PUIC), Sabbagh described it as an example of Iran’s successful diplomacy, adding that Muslim countries will triumph over all conspiracies with unity and solidarity.