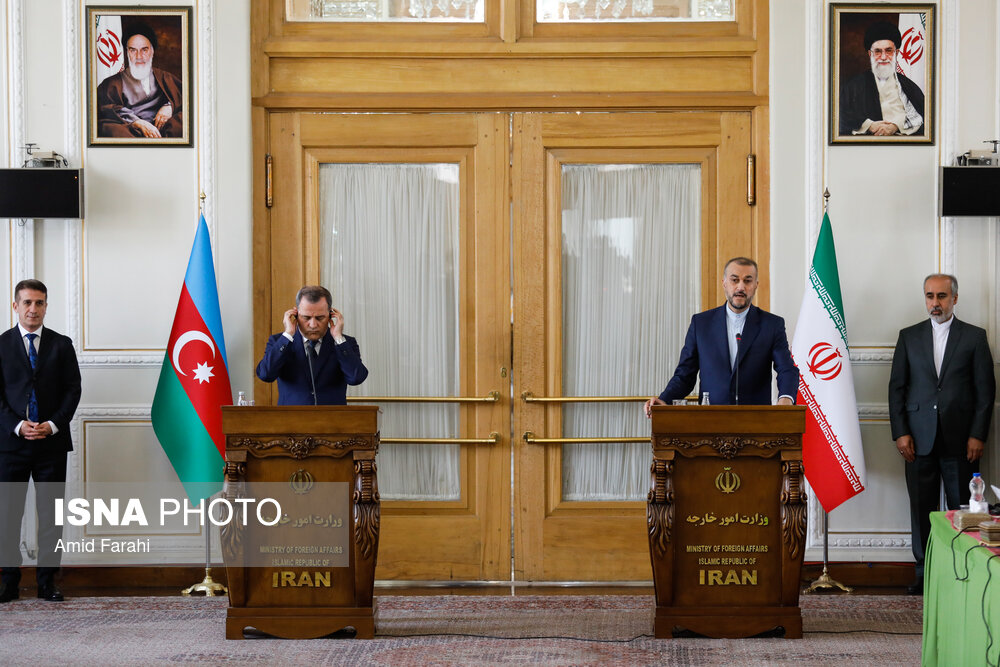 Iran’s Foreign Minister Hossein Amirabdollahian has reiterated Tehran’s support for the peaceful settlement of the Nagorno-Karabakh conflict based on principles of the international law.

“In today’s talks, the issue of the territorial integrity of countries, including the Republic of Azerbaijan, was once again emphasized by us. We also reaffirmed our support for the peaceful settlement of the ongoing Karabakh conflict based on the well-known principles of the international law,” Amir-Abdollahian said at a joint press conference with the visiting Azerbaijani Foreign Minister Jeyhun Bayramov in Tehran on Monday.

“Since the beginning of the Karabakh dispute, the Islamic Republic has always declared its readiness to help resolve the conflict through dialogue. We are still ready to continue our support and assistance in this regard, so that the remaining issues would be resolved on the basis of respect for the territorial integrity and sovereignty of the involved parties and through political dialogue,” he added.

According to reports, Armenian Prime Minister Nikol Pashinyan and Azeri President Ilham Aliyev announced last month that their respective countries would be setting up border security and delimitation commissions, signaling a step towards the settlement of a decades-long conflict over the Nagorno-Karabakh region.

Tensions between Yerevan and Baku remain high more than a year after the arch-foes fought a war over the disputed Nagorno-Karabakh region. The six-week conflict, which claimed more than 6,500 lives on both sides, ended in November 2020 with a Russian-brokered deal that left Azerbaijan largely in control of the territory.

Also in his remarks, Amirabdollahian stated the Islamic Republic of Iran and Azerbaijan have cleared up all previous misunderstandings between the two neighboring Muslim countries.

Tension broke out between Tehran and Baku in October 2021 after the Iranian foreign minister issued a warning concerning certain provocations by the Israeli regime near Iran’s borders with Azerbaijan.

The regime, he said, had used the flare-up of the latest tensions between Azerbaijan and Armenia over the Nagorno-Karabakh region in 2020 to establish a presence in parts of Azerbaijan.

Tensions started to flare up after Azerbaijan’s president criticized military exercises by the Iranian Army’s Ground Forces in the northwestern part of the country. Tehran hit back by saying that holding drills is part of the national sovereignty, warning that Israel’s anti-Iran activities in neighboring countries will not be tolerated.

But later Azerbaijan released the two Iranian truck drivers whose arrest had strained ties between Baku and Tehran.

The move marked a thaw between the two countries a week after their foreign ministers agreed to resolve the issue through dialogue. 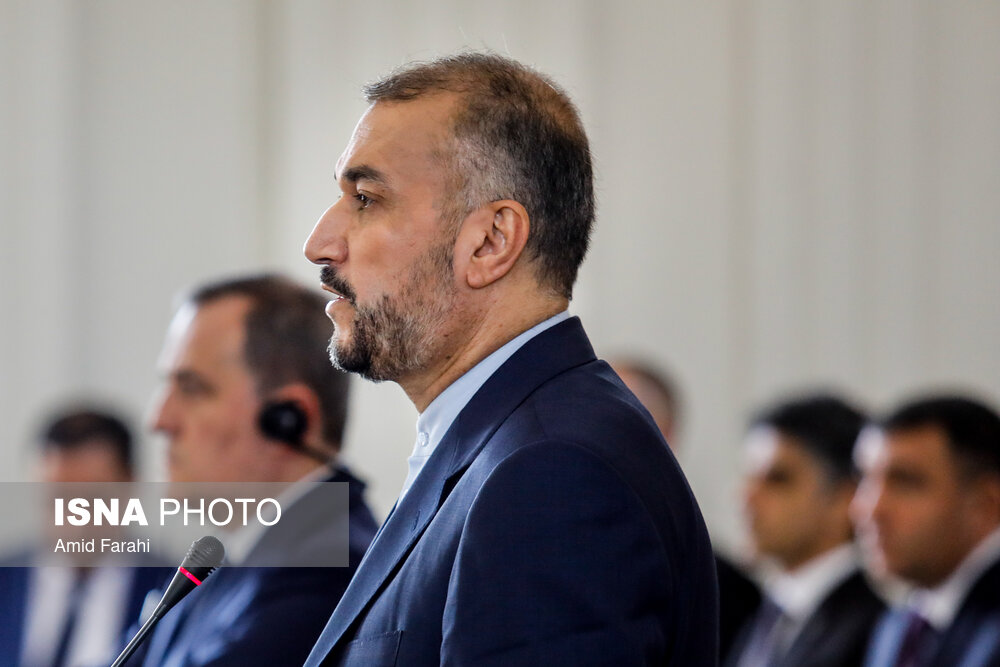 Elsewhere in his Monday remarks, Amirabdollahian touched on the promotion of bilateral ties and said that the volume of their bilateral trade has increased dramatically in the past months.

“Over the past 10 months, we have clarified misunderstandings and we are in the phase of the promotion of increasing relations,” he noted.

“During today’s negotiations, a wide range of bilateral issues were thoroughly discussed and relevant viewpoints exchanged. As you know, the presidents of the two countries have had two one-on-one meetings in the last 10 months. During the meetings, especially in last week’s meeting between Ilham Aliyev and [his Iranian counterpart Ebrahim] Raisi, constructive and forward-looking talks on a new phase of mutual ties between the two countries were held,” Amirabdollahian stated.

“We stressed the need for deepening the relations between the two countries on the basis of understanding, trust and mutual interests,” the Iranian foreign minister added.

The top Iranian diplomat stressed that various existing diplomatic formats between two or more countries should be seriously taken into consideration given unfolding developments and new conditions.

Amirabdollahian went on to note that he had tabled a proposal on hosting a tripartite foreign ministerial meeting between Iran, Azerbaijan and Turkey in Tehran during his last week meeting with his Turkish counterpart Mevlut Cavusoglu in Ankara.

Elsewhere in his remarks, he said that energy and transit are two important issues concerning economic cooperation between Iran and Azerbaijan, stating that Iranian Energy Minister Ali Akbar Mehrabian is going to visit Baku later this week to discuss steps aimed at bringing Khoda Afarin Dam into operation as summer heat is coming.

“Agreements on synchronization of power grids as well as electronic power networks between the two countries will be finalized during the Iranian energy minister’s visit,” Amirabdollahian added.

He stated discussions were also held with his Azerbaijani counterpart on the pollution of the Aras River, stressing that the roots of the contamination have been identified both in Iran and Azerbaijan.

Amirabdollahian also extended the Iranian president’s invitation to Aliyev to visit Tehran, emphasizing that consultations are underway to determine the timing of the trip.

Bayramov, for his part, said that he had fruitful talks with Iranian officials during Monday’s talks on matters of mutual interest as well as regional issues. 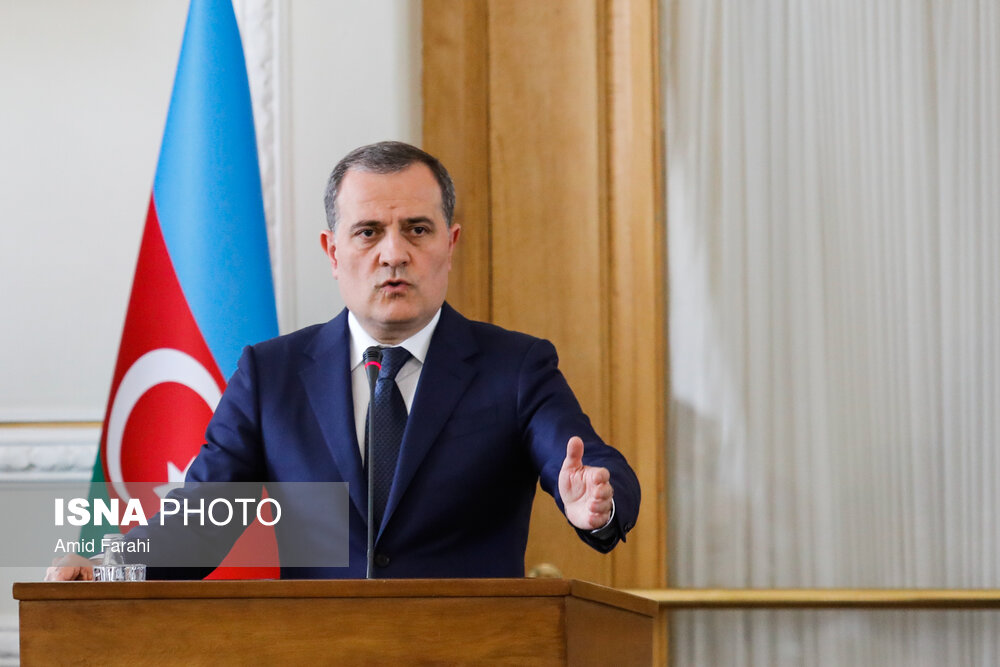 He, however, noted that Tehran and Baku needed to further bolster ties as they enjoy great economic and trade potential.

He also added that his country has reached an argument with Iran to make joint cars and tractors, adding that cooperation on building dams and power plants is also among top priorities for the two neighbors.