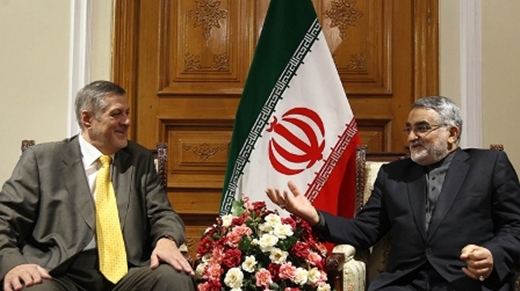 Borujerdi criticized the lack of determination on the side of the US and its European and regional allies to fight terrorism and extremism.

Head of parliament’s National Security and Foreign Policy Committee has said that Iran is committed to assisting Iraq, supports the territorial integrity of its western neighbor, and opposes its disintegration.

Alaeddin Borujerdi made the comments in a meeting Sunday with the visiting UN Secretary General’s Special Envoy for Iraq Yan Kubish during which the Iranian lawmaker called for solidarity of all political, ethnic, and religious groups to restore tranquility and security to Iraq.

Borujerdi criticized the lack of determination on the side of the US and its European and regional allies to fight terrorism and extremism and said, “Classifying terrorists as good and bad, tactical exploitation of terrorists and giving them financial and armed assistance are the strategic mistakes of the US in Syria and the main reason behind the current situation.”

Kubish hailed Iran’s contribution to the reconstruction of Iraq and establishment of peace and security in the Arab country.

“Political and economic reforms are underway in Iraq and Iran’s continued support for Iraq, especially in the field of economy and transfer of political experience is of considerable significance,” he added.

Stressing the positive role of Iran in Iraq, the UN envoy said, “Iran’s continued support for Iraq has an influential role in the establishment of tranquility and security in Iraq.”