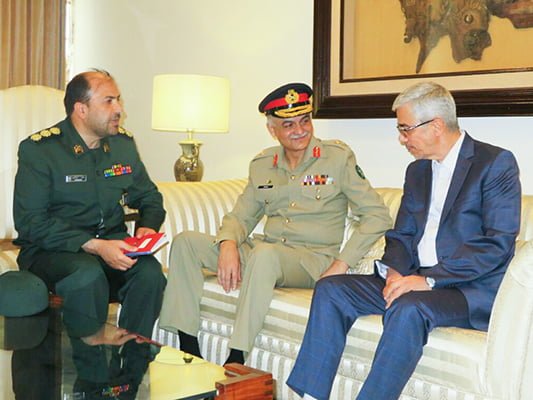 A senior Iranian military official has underlined the need for closer cooperation between Tehran and Islamabad to ensure security and tranquility in the region, particularly the common borders.

Major General Mohammad Baqeri, the chief of the General Staff of the Iranian Armed Forces, made the comment while on a trip to Islamabad.

He said the United States leads the countries seeking to create insecurity in the Middle East, adding countries such as Iran and Pakistan are duty-bound to work together closely to provide regional security.

He described Pakistan as one of the important neighbours of the Islamic Republic of Iran, saying Tehran attaches great importance to its relations with Islamabad, the IRIB News Agency reported.

The top general noted that Pakistan has always had as special status in Iran’s foreign policy. General Baqeri touched upon Tehran-Islamabad military ties in the past, and added, “It is necessary to boost these relations given the current circumstances in Southwest Asia as well as the developments unfolding in the region.”

General Bqeri is in Pakistan at the invitation of the Pakistan Army Chief General Qamar Javed Bajwa.

In the meetings, the two sides discussed ways of enhancing regional security and boosting border and defense cooperation.