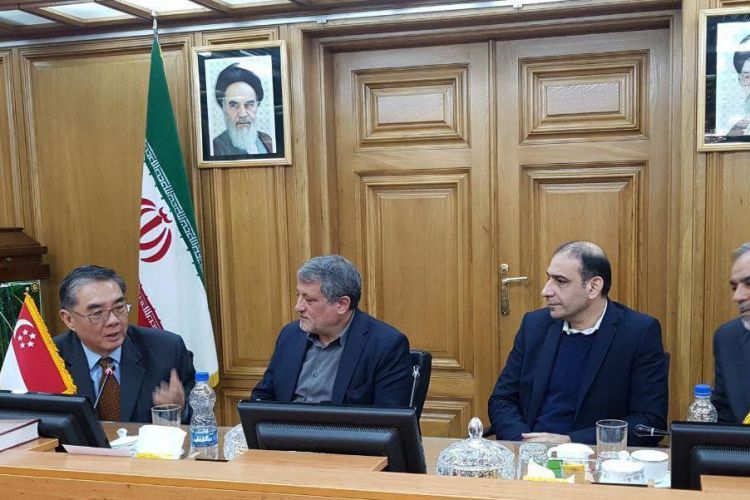 Iran and Singapore have agreed to expand their ties in attracting further foreign investments and tourists.

In a meeting with Singaporean ambassador to Tehran, Chairman of Tehran City Council, Mohsen Hashemi Rafsanjani, called for further expansion of cooperation between the two sides in creating an appropriate ground to attract further foreign investments and tourists.

According to a Farsi report by Hamshari news website, Hashemi also said exchange of experiences in urban development between Iran and Singapore is of great significance.

The chairman of Tehran City Council called for further exchange of tourists and added due to the international sanctions on Iran before 2016, “we still have some problems in offering banking services to foreign tourists which need to be resolved by close banking cooperation between Iranian banks affiliated with Tehran municipality and Singaporean banks.”

The meeting was also attended by a number of Tehran City Council’s members.

Majid Farahani from the Budget Commission of the council said during the meeting that Tehran Municipality is interested in expanding its international ties. “Singapore has a good record in attracting foreign tourists and we can take advantage of the country’s experience in this field.”

He also added Iranian officials have allocated at least one billion dollars to making Tehran smart.

Elham Fakhari, another member of the council, said “we are looking for creative ways to resolve urban problems and Singapore has good experiences in this field.”

Singapore Ready to Cooperate with Iran

For his part, Singaporean Ambassador to Tehran, Ong Keng Yong, said managing a highly populated city like Tehran is highly difficult. “But the comprehensive structure of Tehran City Council is capable enough to cope with the task.”

He referred to the transportation problems in Iran and said by establishing close cooperation with the people, Iranian officials can take long steps in resolving the urban problems.

The ambassador finally expressed his country’s readiness to share urban experiences with the Iranian officials.