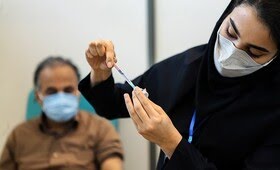 Iran said on Monday it has vaccinated 1,590,000 people over the past twenty four hours bringing the total number of administered coronavirus shots to over 36 million.

The daily number of vaccinations has once again set a new record as the country is trying hard to reach a target of over two million doses per day.

The number of new fatalities and infections, however, remain high as Iran is slowly moving past the peak of its fifth wave of the outbreak.

Based on official figures, so far over 114,700 Iranians have lost their lives to the deadly respiratory disease.

Over the past months the Iranian government was widely criticized for the slow pace of inoculations.

Iran is importing tens of millions of coronavirus vaccine doses and is domestically producing several types of shots to combat the outbreak.