Iranian Foreign Minister Mohammad Javad Zarif has described Iran and Senegal as two major countries that can serve as a bridge between West Asia and West Africa.

During the visit of Zarif and his entourage to Dakar, a joint economic forum was held with the participation of senior officials from the two countries.

Dozens of representatives from Iran’s Vice-Presidency for Science and Technology and Iranian knowledge-based companies were among members of the delegation accompanying Zarif, who held B2B talks with their Senegalese counterparts on ways to develop mutual scientific cooperation between the two sides.

Addressing the Iran-Senegal Joint Economic Forum on Monday, Zarif said the two Muslim states can play an important role in the economic development and prosperity of the two regions.

What follows is the full text of FM Zarif’s address to the conference: 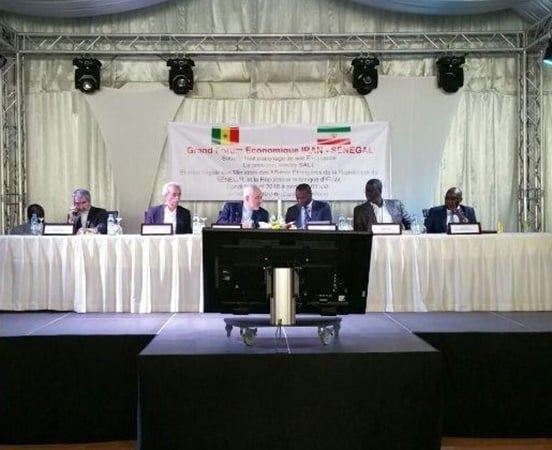 First of all, I would like to thank the warm hospitality of the government and the honourable nation of Republic of Senegal during my visit to the country.

I am very pleased to be accompanied by a delegation of public and private sector economic actors from the Islamic Republic of Iran who work in the fields of banking, investment, automotive industry, pharmaceuticals and healthcare, electrical and water industries, agriculture and food industries, higher education, transportation, urban engineering, oil and petrochemicals, as well as major knowledge-based companies who have attended this economic assembly along with the traders, and economic industrial actors of the Republic of Senegal.

Indeed, holding this conference reflects the existence of a common political will to promote the presence, participation and greater role of the two countries’ private sectors in the economic and commercial relations of both sides.

The Islamic Republic of Iran and the Republic of Senegal, as two major countries in West Asia and West Africa and the Muslim world, can serve as a bridge between these two important regions, and can play an important role in the economic development and prosperity of the two regions. Iran and Senegal can also contribute to expansion of regional and international peace and stability as well as the achievement of unity and solidarity in the Muslim world.

Attempts to increase trade between the two countries with a win-win approach not only guarantee the export of goods, engineering services, and the transfer of technology from Iranian companies to Senegal, but also meet the needs of the Islamic Republic of Iran, especially in the agriculture and mining sectors through Senegalese economic actors.

Both sides emphasize the development of trade and economic cooperation. Increasing economic ties is possible through banking cooperation, and this needs more activities by the private sector as well as the support of the two governments.

The private sectors of the two countries expect government officials to draw up a clear agenda for the development of economic and commercial relations along with the development of political relations and international cooperation. Because the increase in the private sector’s activities needs the attention of the two countries’ political officials.

Therefore, outlining a vision for cooperation, and increasing the trade volume of the two countries to an acceptable level in the near future in line with existing capacities should be put on the agenda.

The Islamic Republic of Iran, in cooperation with the government and the private sector of the Republic of Senegal, is ready to turn this country into an auto-production hub in the West African region while the first steps in this regard have been taken about 10 years ago with the construction and launch of “Seniran Auto” factory. Today, with the help of God and support of the honourable government of Senegal in removing some technical problems and infrastructural barriers, the company’s activities will be further promoted.

At a meeting with the Senegalese officials, I will discuss the ways to facilitate the presence and communication of traders from Iran and the African country, and I will call for more attention to mutual economic cooperation, especially in the fields of trade, technical and engineering services, automotive industry, oil and petrochemicals, electricity and food industries and new technologies in which the two countries have a comparative advantage.

I hope the businesspersons from the two countries will make the most out of the opportunities provided at this conference and reach good agreements to increase cooperation.

In the end, I once again thank the warm hospitality of the government and the noble nation of the Republic of Senegal, especially my brother Alioune Saar, the Minister of Commerce of Senegal, the chairmen of the two countries’ Chambers of Commerce, and the economic actors who helped in holding this business conference.

I wish you good luck and I guarantee that all the capabilities of the Islamic Republic of Iran will be used to develop ties between the private and public sectors of the two countries.