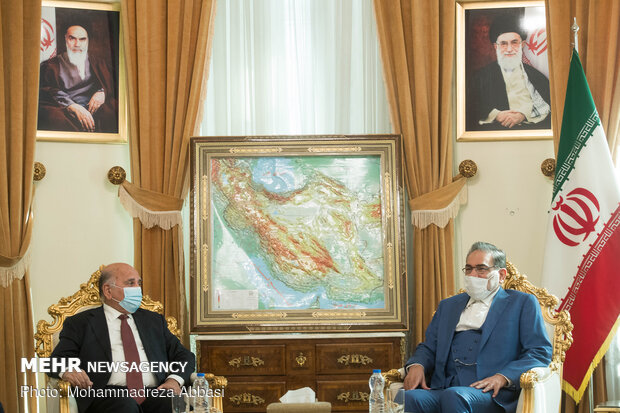 The secretary of Iran’s Supreme National Security Council says Iran and other countries fighting terror will not allow “puppet Takfiri terrorism” to rear its ugly head again in the region.

Speaking in a meeting with Iraqi Foreign Minister Fuad Hussein in Tehran, Ali Shamkhani said the United States’ recent moves to boost and expand the activities of ISIS terrorists in the region and its violent attacks on anti-terror forces of the resistance front mark the beginning of a fresh wave of organized terrorism.

The top Iranian official underscored that any delay in the implementation of the Iraqi parliament’s legislation requiring foreign military troops to leave Iraq will further stoke tension and crises in the region.

Shamkhani highlighted the significance of cooperation and partnership among regional countries to ease tensions and the necessity of holding constructive talks to help tackle the existing crises.

“The tranquility and security and Iraq enjoys today is due to the power of top clerics, the prudence of Iraqi statesmen and the struggles of the country’s Armed Forces and popular resistance groups and should be safeguarded,” Shamkhani noted.

He also touched upon the deplorable situation of Yemeni people which, he said, bring to mind a sort of “genocide.” He expressed Iran’s readiness to help end the 4-year conflict in Yemen.

The top Iraqi diplomat, in turn, presented a report on the recent political and security developments in his country.

Hussein said security and stability lay the groundwork for economic development and welfare. He added the establishment of security is regarded as the number-one priority for a country such as Iraq which has been involved in fighting terrorism and insecurity for years.

He touched upon the agreements reached between the officials of both countries on Iraq’s payment of its debts to Iran, which had been delayed due to foreign sanctions.

He said some key hurdles have been removed on the back of relentless efforts by Iranian and Iraqi financial and banking sectors as well as economic institutions.

The Iraqi foreign minister said the trend of payment will soon begin based on the model agreed upon by both countries.