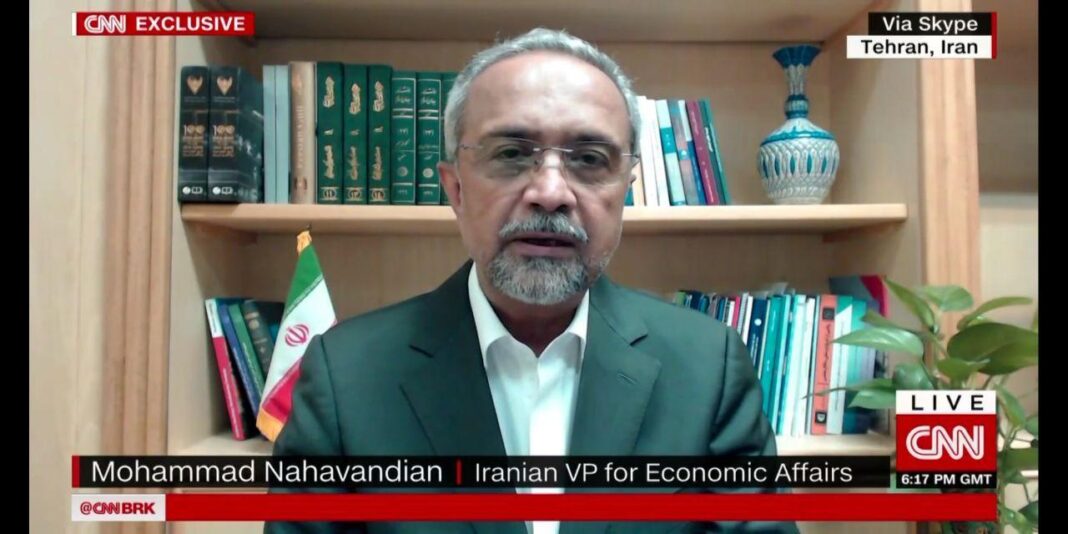 Iran says neither the United States, nor any other country in the world, has the power to veto the loan requests of International Monetary Fund (IMF) member states.

“In IMF we do not have any veto power for any country, and actually it’s a policy of IMF for evenhandedness in appraisal and approval of requests,” Iranian Vice-President for Economic Affairs Mohammad Nahavandian told CNN’s Christiane Amanpour on Monday night.

“What Iran has requested for is RFI, Rapid Financial Instrument, which is an automatic instrument that governments and countries can use when they are in need of some financing,” he added.

“Iran has been a founding member of IMF, with very good record. And it is expected from this international body to do what [it] is expected to do. That request is now in due process. Many countries have expressed their support for this,” he noted.

Nahavandian said at the time of a pandemic, it is very important to realize that if you do not confine and contain the virus in one part of the world, actually you are helping to spread that virus in other parts of the world.

“So, it is not a local issue, it’s a global issue. The reality is now we are observing the dark side of globalization. The problem is global, but we do not have global solution. Now is the time of cooperation, not to start new quarrels and fight against access of one nation to medical supplies. We are all in the same boat, as they say.”

“Despite the rhetoric that food and medicine is no subject to sanctions, but as you know, trade has two ways. If you want to pay for the goods that you import, you have to use financial institutions and, all the banks and financial institutions have been subject to blackmailing by the US government. So, in reality, provision of medical supplies has been very difficult and very costly.”

Asked about Tehran’s rejection of the US’ offer of help and assistance, Nahavandian said, “Deeds have to conform your words. You cannot have it both ways. You cannot prevent access to medical supplies and medicine and food, and at the same time you say that you are ready to assist.”

He further rejected the doubts raised about the official figures and statistics released by the Iranian government.

“I think if you go to the cyberspace in virtual world, everything is under doubt, even the statistics from the US is being doubted on. What our health ministry has been doing during all these 45 days has been informing according to the confirmed cases; and as the testing capability grew, that is a very important part of what you just mentioned. Because of the difficulty in access testing packs, we did not have all the cases confirmed. And now we are having more information, and the screening thing that our health ministry started and has been praised by WHO, now more than 60 million peoples in the country have been screened. So, our information is growing nationwide.”

“The data shows that the peak in some of the provinces has been passed, and now we are on the de-escalating part of the curve. We are hopeful that as the cooperation of people, which was shown in the first phase, continues, we will be able to control, and the number of facilities in Iran prove that it has been sufficient to respond to all the cases who are in critical condition. We did not have any cases of a patient coming to a hospital and not being able to be treated there. And we are proud of that,” he added.

The Iranian vice-president gave an assurance that the government of President Rouhani is fully transparent on the issue of COVID-19 pandemic.

“We do not deal with the life of people, and the policy shows that the life of people is as important for us as the economic life of the people. The policy which was designed for that strengthened the budget for our health ministry, that is why we are in acceptable situation now compared to some other countries, even in Europe, even in the United States,” he noted.

“In Iran, we think that we are in control. The number of infected people, the number of patients has passed that increasing level. But we have to be very prudent. The restrictions are, so, in place. We hope that we can confine in the new provinces as it has been confined in the provinces which started with, will pass this stage,” he added.

He pointed to the gradual reopening of low-risk businesses in coming days, and said this is part of the third stage of the social distancing policy in Iran.

“Nowruz is the time for Iranians to travel around the country. When the government started informing people and asking them no to travel, it was hard for Iranians to just do that. But the statistics showed us that more than 70 percent of people voluntarily decided not to travel. Because of that, the second phase had the mandate from people to make it stricter and have some controls on the cities for people not to travel outside their state. And now, if you look at the statistics from our health ministry, today and yesterday, we can see a declining trend in many provinces in the country.”

“The third stage is called smart social distancing. So, gradually, some necessary businesses and offices are opening up, remaining at home is still the slogan. One third of the people will stay at home, people from the government offices, and unnecessary will still remain closed,” he noted.